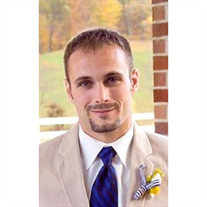 Brandon Michael Warner, 30, of Point Pleasant, passed away Thursday, July 12, 2018, at Pleasant Valley Hospital in Point Pleasant. He was born March 1, 1988, in Gallipolis, Ohio, a son of Randy Joe Warner and Libby Kay (Bailey) Warner of Leon. Brandon was a graduate of Point Pleasant High School Class of 2006, where he starred in football, wrestling and baseball.  Later, he coached for the Mason County Youth Wrestling League and several local softball teams.  He was a Mountaineer and Cincinnati Reds fan, an avid outdoorsman and loved playing golf. He was employed by Constellium Rolled Products in Ravenswood, as a production supervisor and previously had worked seven years for AEP River Transportation.  Brandon was a zoning board member for the City of Point Pleasant and a member of the National Rifle Association. In addition to his parents Randy and Libby, he is survived by his wife, Olivia Lane (Burdette) Warner of Point Pleasant; a daughter, Layla Lane St. Onge, who he loved more than life; two brothers, Randy Joe "Joey" Warner II of St. Albans and Herman Matthew Warner of Hurricane; sisters-in-law, Haley Burdette ( Marcello) Strangis, Megan Bates and Lauren Bates; and nieces and nephews, Trey, Justice, Kennedy and Kolin Warner and Lucia Strangis.  He is also survived by his fathers-in-law and mothers-in-law, Stan and Carrol Burdette and Kelly and Brad Clark of Point Pleasant; maternal grandmother, Virginia Bailey of Hurricane; grandfather-in-law, Ronald Burdette of Leon; grandmother-in-law, Della Sauer of Point Pleasant; a host of aunts, uncles and cousins; and his beloved pups, Riley Jane and Maya June. Preceding him in death were his paternal grandparents, Herman and Jane Warner; grandmother-in-law, Jessie Burdette and grandfather-in-law, J.P. Sauer. A Christian, Brandon attended Good Shepherd United Methodist Church in Point Pleasant.  Not only was he a loving husband, father and son, Brandon had a big heart and found joy in helping and doing things for others.  Words cannot explain how much he is loved and will be missed by his friends, family, wife Livi and daughter Layla.  "He will always be in his cupcake's heart." A Celebration of Life service will be 4:00 p.m. Saturday, July 21, 2018, at Wilcoxen Funeral Home in Point Pleasant, with Pastor Joe Nott officiating.  The family will receive friends two hours prior to the service Saturday at the funeral home. Condolences may be expressed to the family and memories may be shared by visiting www.wilcoxen funeralhome.com.

The family of Brandon Michael Warner created this Life Tributes page to make it easy to share your memories.

Send flowers to the Warner family.