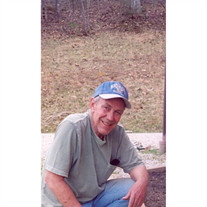 Bromley Richard Workman, 80, of Point Pleasant, passed away Thursday, April 9, 2020, at his home. Dick was born June 24, 1939, at St. Mary's Hospital in Huntington, WV, a son of the late Bromley See Workman and Grace Louise (Henniger) Workman. In addition to his parents, he was preceded in death by many uncles and a favorite aunt, as he had a big family on both sides. He was preceded in death by a granddaughter, Allison Catharine Hollis, daughter of Connie (Workman) Hollis, who is buried on the Workman Family Farm, Louisa, KY. He was also preceded in death by his very best, lifelong friend Bobby Errett, formerly of Point Pleasant, WV, and by his once in a lifetime dog Dusty who was a house dog, a duck retriever, and was even known to retrieve an occasional ground hog. He is survived by his wife, Susan Jane (Hoag) Workman of Point Pleasant; son and daughter-in-law, Douglas Edward and Vickie Workman of Point Pleasant; daughter and son-in-law, Connie Jane and Jessie Lynn Hollis of Columbia, SC; grandchildren, Rachel Lynn (Andy) Blankenship, Hannah Ruth (Kyle) Curry, Mary Grace Workman, Douglas Edward Workman Jr., and Emily Louise (Bruce) Heggie; two great-grandchildren, Case Michael Curry and Bromley Knox Heggie; and brother Larry (Peggy) Workman of Louisa, KY. Richard was born just before WWII and because of the lack of penicillin due to the war, he suffered untreated ear infections until he was in elementary school. He was eventually hospitalized for four days for a penicillin treatment, but the damage was beyond repair, as he had permanent loss of hearing in his right ear and poor hearing in his left. Dick believed that living with his impairment made him who he was and felt his life may have taken a different turn had he not bore this burden throughout his life. As a young man Dick attended and was baptized at Highlawn Baptist Church in Huntington. Dick was a graduate of Huntington East High School Class of 1957 and Marshall University Class of 1961 with a B.S. in Biology and continued on to receive his Master's in Science Education. After his first year at Marshall, he and Susan, his high school sweetheart, both 19, were married. She began working various jobs to help them eat, while he completed his college degree. At the time of graduation, Dick got a job in Point Pleasant, WV at the newly built Point Pleasant Junior High School where he worked for nearly 30 years. He taught science for many years before becoming Vice Principal, until retiring in 1989. He liked teaching very much and was considered a great teacher. He also straightened up many a wayward young man or woman back in the days when discipline looked a little different than today; with many former students actually thanking him for that. Dick was an avid hunter; believing he was born to hunt as it was in his genes. The love of his life was hunting, fishing and running game dogs: bird dogs, rabbit dogs, fox hounds. He shared many a wonderful day in the great outdoors with his Dad and his favorite hunting buddies: son Doug, brother Larry and nephew Jake, and best friends Bob Errett and Charlie Coffman. After retirement, the Workmans stayed in Point Pleasant where he continued to enjoy the outdoors and began wood working. The couple enjoyed life for a good many years building a "summer home" at the Louisa, KY farm until health issues eventually began to slow them down. A private family burial will be held at the Workman Family Cemetery in Louisa, KY. Services are under the direction of Wilcoxen Funeral Home in Point Pleasant, WV. Condolences may be expressed to the family and memories may be shared by visiting www.wilcoxenfuneralhome.com

The family of Bromley Richard Workman created this Life Tributes page to make it easy to share your memories.

Send flowers to the Workman family.