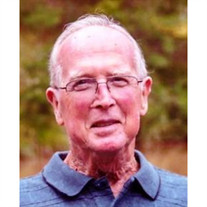 Brookie B. Henry, 81, of Point Pleasant, passed away Friday, June 23, 2017, at Holzer Senior Care Center, Bidwell, OH. He was born August 12, 1935, in Gallipolis Ferry, a son of the late William Isaac Henry and Violet Orvetta (Meaige) Lee. Brookie was a graduate of Point Pleasant High School Class of 1953. He served his country in the United States Marine Corps as Sergeant from 1953-56, as a drill instructor and military police officer. He retired from Kaiser Aluminum in Ravenswood and also had worked as a Real Estate Agent with Homestead Realty in Point Pleasant. He was a member of Trinity United Methodist Church, Minturn Lodge 19 AF & AM of Point Pleasant, Scottish Rite of Charleston, and US Marine Corps League in Ripley. In addition to his parents, he was preceded in death by his wife, Leah (Love) Henry; daughter, Julie Henry Boone; grandson, Christopher Evans; brother, Willie Henry; brother-in-law, Jack Sturgeon; and mother-in-law, Therma Love. He is survived by his daughter and son-in-law, Sharon and Mike Terry of Point Pleasant; granddaughters, Abbey (Adam) Roberts of Mooresville, NC, Laura (Travis) Parks of Federal Way, WA and Megan (Tyler) Godby of Proctorville, OH; son-in-law, Tim Boone of Proctorville; and great-grandsons, Ford Roberts and Henry Parks who were his pride and joy in life. He is also survived by one sister, Joy Sturgeon; brothers, Jackie (Joyce) Lee, Rolfie (Sharon) Lee, Charlie Lee and Allen (Beverly) Lee; sister-in-law, Sheila Henry; brother-in-law, Jim (Elizabeth) Love of Brasstown, NC; special friend, Anna Thompson; and many nieces and nephews. Brookie loved hunting, fishing, gardening and spending time at the Ponderosa farm along with the special fun vacations with his family over the years. He will be deeply missed by his loving family and friends. A funeral service will be 1 p.m. Wednesday, June 28, 2017, at Wilcoxen Funeral Home in Point Pleasant, with Pastor Jim Kelly officiating. Burial will follow at Suncrest Cemetery in Point Pleasant where military graveside rites will be given by the Cpl. Walter L. Mann Detachment 1065 Marine Corps League. The family will receive friends two hours prior to the funeral service Wednesday at the funeral home. Condolences may be expressed to the family and memories may be shared by visiting www.wilcoxenfuneralhome.com.

The family of Brookie B. Henry created this Life Tributes page to make it easy to share your memories.

Send flowers to the Henry family.