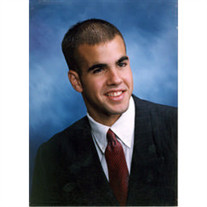 Bryan Keith Buckle, 26, of Apple Grove, WV, died Friday, March 16, 2012 in Lesage, WV. He was born August 12, 1985, in Gallipolis, Ohio, a son of Mike and Beverly (Shank) Buckle of Apple Grove. Bryan was a 2003 graduate of Point Pleasant High School, a member of Mount Union United Methodist Church in Pliny, WV, and was employed by American Electric Power at the Central Machine Shop in South Charleston, WV as a turbine machinist. He was preceded in death by, paternal grandparents, Lester and Beulah Buckle; maternal grandmother, Betty Jo Finley Shank; and a cousin, Chad Brodsky. Surviving in addition to his parents are, the Love of His Life, daughter "Princess" Anna Grace Buckle; brother, Brandon (Ashley) Buckle of Apple Grove; maternal grandfather, Glenn (Nell) Shank of Gallipolis, Ohio; a special nephew and niece, Connor Lee Buckle and Mya Dawn Buckle of Apple Grove; several aunts, uncles, cousins, and a host of friends. Bryan was loved by everyone that knew him, and always smiling. A funeral service will be held at 1 p.m., Thursday, March 22, 2012 at the Mount Union United Methodist Church in Pliny, WV with Evangelist John Smith and Pastor Rick Waller officiating. Burial will follow in the Beale Chapel Cemetery in Apple Grove, WV. Visitation will be from 6-9 p.m., Wednesday at the Wilcoxen Funeral Home in Point Pleasant and one hour prior to the service at the church on Thursday. Online condolences may be made at www.wilcoxenfuneralhome.com.

The family of Bryan Keith Buckle created this Life Tributes page to make it easy to share your memories.

Send flowers to the Buckle family.