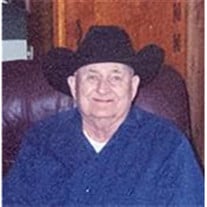 Buster Clonch, 91, of Gallipolis, Ohio, died Saturday, March 2, 2013, at home. He was born February 12, 1922, in Henderson, WV, a son of the late Charles Issac Newton Clonch and Rebecca Jane (Neal) Clonch. Buster attended the Silver Memorial Freewill Baptist Church in Gallipolis; and was a member of Carpenters Local No. 650 of Pomeroy, OH. He had made his home the past 12 years with Patty and Dencil. In addition to his parents, he was preceded in death by his wife, Dorothy Elizabeth Clonch; one daughter, Helen L. Cooper; five sisters, Cecil Irene Likens, Lena Pearson, Melva Roberts, Mary Doss, and Neva Bowens; and four brothers, Lewis Clonch, Orville Clonch, Homer Clonch and Wilbur Clonch. Buster is survived by his children, Lillian (Lewis) Clagg, Susie (Tony) Williamson, Patty (Dencil) Campbell, Buster B. (Delores) Clonch, Carol "Eddie" (Jeanie) Clonch, and Randall (Diana) Clonch all of Gallipolis; and was blessed with many grandchildren, great grandchildren, and great great grandchildren. A graveside service and burial will be held at 2 p.m., Monday, March 4, 2013, at Concord Cemetery in Henderson, WV with Speaker Ronnie Cremeans officiating. There will be no public visitation. Arrangements are under the direction of Wilcoxen Funeral Home in Point Pleasant. Online condolences may be made at www.wilcoxenfuneralhome.com.

The family of Buster Clonch created this Life Tributes page to make it easy to share your memories.

Send flowers to the Clonch family.