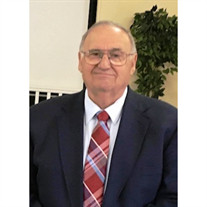 Pastor Charles H. "Charlie" Birchfield, 78, of Gallipolis Ferry, went home to be with his Lord, Tuesday, January 12, 2021. He was born December 29, 1942, in Southside, a son of the late Cecil A. "Bud" Birchfield Sr. and Anita G. (Hall) Birchfield. In addition to his parents, he was preceded in death by a brother, Kenneth E. Birchfield. Charlie received the Holy Ghost in 1973, at which time his ministry began.  He was currently the pastor of the Lifeline Apostolic Church in Point Pleasant, and  had pastored for 46 years.  He was a graduate of Point Pleasant High School Class of 1961, a former member of the National Guard and retired with 38 1/2 years service as manager from Appalachian Tire of Point Pleasant. He is survived by his wife of 55 years, Diann (Oliver) Birchfield; children, Teresa (Brian) Newell of Gallipolis, OH, Bobby Adams of Gallipolis Ferry and Cindy Adams of Gallipolis Ferry; a grandson, Charles Brandon (Haley Cox) Newell of Gallipolis, OH; two great-grandchildren, Maddison Newell and Braylie Newell of Gallipolis.  He is also survived by a brother, Cecil A. (Betty) Birchfield of Gallipolis Ferry; two sisters, Janet Davis of Gallipolis and Sally Meeks of Gallipolis Ferry; several nieces and nephews; his beloved church family; and a host of friends. A funeral service will be 1 p.m. Sunday, January 17, 2021, at Wilcoxen Funeral Home in Point Pleasant, with Pastor Daniel Goodman and Evangelist James Owens officiating. Burial will follow at Harmony Cemetery in Southside. The family will receive friends one hour prior to the funeral service Sunday at the funeral home. Social distancing will be observed and face masks are required. Condolences may be expressed to the family and memories may be shared by visiting www.wilcoxenfuneralhome.com.

The family of Charles Harrison Birchfield created this Life Tributes page to make it easy to share your memories.

Send flowers to the Birchfield family.