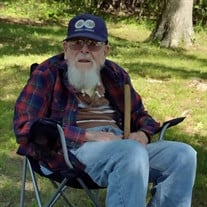 Charles E. Burrows, 92, of Fannettsburg, PA, passed away Wednesday, October 6, 2021, at the Chambersburg Hospital in Chambersburg, PA. He was born April 17, 1929, in Apple Grove, WV, a son of the late Emzie "Red" Burrows and Mary Evelyn (Nibert) Burrows. In addition to his parents, he was preceded in death by brothers, Cleo Edward Burrows Sr. and Carl E. Burrows; and a sister, Beulah Stout. Charles was a member of the Spring Run Bible Church of Spring Run, PA. He served his country honorably in the United States Army and was a painter by trade. He is survived by a son, Gary Lee Burrows of Parkersburg, WV; a brother, Leotis F. Burrows of Grove City, OH; and four grandchildren. A graveside service and burial will be held at 11 a.m. Monday, October 11, 2021, at the Beale Chapel Cemetery in Apple Grove, with Pastor Ryan Thomas Henderson officiating. Military graveside honors will be given by the West Virginia Army Honor Guard. The family request that those attending the graveside service Monday, wear a face mask. Arrangements are under the direction of Wilcoxen Funeral Home in Point Pleasant. Condolences may be expressed to the family and memories may be shared by visiting www.wilcoxenfuneralhome.com.

The family of Charles E. Burrows created this Life Tributes page to make it easy to share your memories.

Send flowers to the Burrows family.