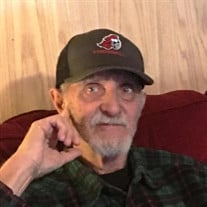 Dale Lee Smith, 85, of Point Pleasant, went to be with the Lord, Saturday, April 17, 2021, at Cabell Huntington Hospital in Huntington, WV. He was born December 31, 1935, in Hurricane, WV, the son of the late Gertrude Smith. In addition to his mother, he was preceded in death by his grandparents whom he called his parents, because they raised him from the age of 6 yrs. to adulthood, Lyman and Nora Smith. Also preceding him in death were brothers and sister-in-law, Bob and RoseMary Smith and Ted Smith; sister, Betty Smith; sister and brother-in-law, June and Ronnie Thomas; sister-in-law, Linda Bowles; brother-in-law, Paul Jones; and father-in-law and mother-in-law, J.C. and Marie Perkins. Dale was a graduate of Hurricane High School Class of 1953 and retired with 36 yrs. service from the Kaiser Aluminum Plant in Ravenswood. He was a member of the Point Pleasant Moose Lodge and American Legion Post 23 of Point Pleasant. He coached in the Mason County Little Men's League from 1968 into the early 80's. His sons referred to him as, "The best coach ever". Dale was a proud supporter of Point Pleasant High School sports. He was best known for running the downs marker at PPHS football games for over 40 yrs. In 2015, he was inducted into the Point Pleasant High School Sports Hall of Fame as a proud booster. He is survived by his wife of 61 years, Barbara R. (Perkins) Smith of Point Pleasant; three sons, Rick (Shelly) Smith of Ashton, Kevin (Julie) Smith of Portsmouth, OH and Matt (Kay) Smith of Cottageville, WV; six grandchildren, Brandan (Mallory) Smith, Bryan (Jessica) Smith, Klaire Smith, Dakota Smith, Taylor Burchett and Gabrielle Smith; and a great-grandson, Cameran Smith. He is also survived by a brother, Jim (Shirley) Smith of Hurricane, WV; sisters-in-law and brothers-in-law, Janie (George) Boggess of Rainelle, WV, John (Wanda) Perkins of Winfield, Donna (Tim) Stickrod of Virginia Beach, VA and John Bowles of Colonial Heights, VA. Dale will be sadly missed by his family and friends. For those considering an expression of sympathy, memorial contributions may be made to: Point Pleasant High School Football Boosters, 280 Scenic Drive, Point Pleasant, WV 25550. A private family service and burial will be held at the convenience of the family. Arrangements are under the direction of Wilcoxen Funeral Home in Point Pleasant. Condolences may be expressed to the family and memories may be shared by visiting www.wilcoxenfuneralhome.com.

Dale Lee Smith, 85, of Point Pleasant, went to be with the Lord, Saturday, April 17, 2021, at Cabell Huntington Hospital in Huntington, WV. He was born December 31, 1935, in Hurricane, WV, the son of the late Gertrude Smith. In addition to... View Obituary & Service Information

The family of Dale Lee Smith created this Life Tributes page to make it easy to share your memories.

Send flowers to the Smith family.