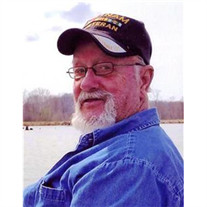 Daniel "Dan" Eugene Roush, 73, of Point Pleasant, died Tuesday, October 31, 2017, at Pleasant Valley Hospital. He was born October 7, 1944, in Hartford, WV, a son of the late Arthur Franklin Roush and Irene Elizabeth (Varian) Roush. Dan was a United States Army Veteran who served his country honorably during the Vietnam War and was a self employed contractor. In addition to his parents, he was preceded in death by three brothers and one sister. He is survived by his wife, Sally Lou (Love) Roush of Point Pleasant; a daughter, Stacy J. (David) Schwartz of Point Pleasant; one son, Jeffrey Eugene (Andrea) Roush of Point Pleasant; and four grandchildren, Cody Schwartz, Derek Schwartz, McKenzie Roush and Shelby Roush. He is also survived by one sister, Janice M. (Jim) Reitmire of Hartford; two brothers, Ronny (Patty) Roush of Ravenswood, WV and Harold Harrison Roush of Illinois; a brother-in-law, Preston Love of Point Pleasant; and nephew, Shane Love of Point Pleasant. A funeral service will be 11 a.m. Saturday, November 4, 2017, at Wilcoxen Funeral Home in Point Pleasant, with Rev. Huling Greene officiating. Burial will follow at the Evergreen Cemetery in Letart, WV. Military graveside rites will be given by the West Virginia Army Honor Guard and American Legion Post 23 of Point Pleasant. Visitation will be from 6-8 p.m. Friday at the funeral home. Condolences may be expressed to the family and memories may be shared by visiting www.wilcoxenfuneralhome.com.

The family of Daniel Eugene Roush created this Life Tributes page to make it easy to share your memories.

Send flowers to the Roush family.