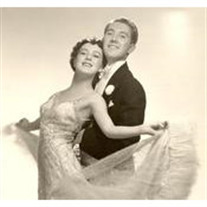 Dolores Elaine Wilhelm, 93, of Point Pleasant, passed peacefully at home surrounded by her loved ones on Saturday morning, April 13, 2013. She is survived by her beloved husband of 72 years, Donald Lee Wilhelm; daughters, Doreen Strickler of Texas, Peggy Gillespie of Point Pleasant; and grandson, Jeffrey Gillespie II of Point Pleasant. Dolores was born on November 20, 1919 in Wheeling, WV, was a passionate dancer and trained from age 7. She and Don were married on August 10, 1940, and created the adagio dance team, Don & Dolores. They performed professionally throughout New York, Pennsylvania, Ohio and West Virginia in the early 40's. In 1954, she opened her own Dance & Baton School in Wellsburg, WV and taught thousands of young aspiring children up until 1971. She and her daughter, Peggy Gillespie, then opened a baton studio in Point Pleasant in 1975 and created the National Champion Baton Team the Stylettes where she and Peggy continued to teach grace and style to young ladies. Dolores was a devoted wife, and dedicated mother and grandmother. She was a member of the Pleasant CEOS Homemakers Club in Point Pleasant for many years and enjoyed crafting with her friends. She loved working in her flower garden at home, sewing clothes and crafts, traveling and lunching about town with her husband, Don. A private family viewing and funeral service was performed at Wilcoxen Funeral Home on Monday with Pastor Steven Sanderson officiating, and she was interred at Kirkland Memorial Gardens thereafter to rest in peace with the Lord. Online condolences for the family may be sent to www.wilcoxenfuneralhome.com.

Dolores Elaine Wilhelm, 93, of Point Pleasant, passed peacefully at home surrounded by her loved ones on Saturday morning, April 13, 2013. She is survived by her beloved husband of 72 years, Donald Lee Wilhelm; daughters, Doreen Strickler of... View Obituary & Service Information

The family of Dolores Elaine Wilhelm created this Life Tributes page to make it easy to share your memories.

Send flowers to the Wilhelm family.