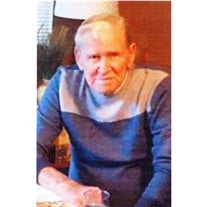 On Monday, January 14, 2019, a good man went home.  He fought as long as he could.  We are glad he is not suffering anymore, but it still hurts. Donald "Don" Wade Fowler, 77, of Gallipolis Ferry, passed away at Holzer Senior Care, Bidwell, OH. He was born March 15, 1941, in Rock Branch, WV, a son of the late Joseph L. Fowler and Geraldine (Barker) Fowler. Don was a member of St. Peters Lutheran Church of Point Pleasant.  He was a graduate of Poca High School Class of 1958 and served his country honorably in the United States Marine Corps and Army.  He was a member of American Legion Post 23 of Point Pleasant and retired as a lock operator from the Robert C. Byrd Locks and Dam. In addition to his parents, he was preceded in death by a sister, Connie Fowler; and one brother, Larry Fowler. Don is survived by his wife, Irene Lydia (Sauer) Fowler whom he married August 21, 1965; two children from a previous marriage, Laura and Blaine Miller of North Dakota, Anthony and Diana Fowler of North Dakota; and three children from his current marriage, Mike Fowler of Gallipolis Ferry, Sandra Fowler and Ryan Moore of Gallipolis Ferry and Manuela and Danny Hall of Gallipolis Ferry.  He is also survived by four grandchildren, Matthew Miller, Ethan Miller, Jordan Hall and Brandon Hall; four great-grandchildren; two brothers, Joseph L. Fowler and Albert Fowler; and five sisters, Joan Shamblin, Nancy Fowler, Evelyn Stover, Joyce Queen and Bonnie Bengert. A funeral service will be 1 p.m. Saturday, January 19, 2019, at Wilcoxen Funeral Home in Point Pleasant, with Pastor Darren Ellis officiating.  Burial will follow at Jordan Cemetery in Gallipolis Ferry.  Military graveside rites will be given by the West Virginia Army Honor Guard.  The family will receive friends two hours prior to the funeral service Saturday at the funeral home. Condolences may be expressed to the family and memories may be shared by visiting www.wilcoxenfuneralhome.com.

On Monday, January 14, 2019, a good man went home.  He fought as long as he could.  We are glad he is not suffering anymore, but it still hurts. Donald "Don" Wade Fowler, 77, of Gallipolis Ferry, passed away at Holzer Senior Care, Bidwell,... View Obituary & Service Information

The family of Donald Fowler created this Life Tributes page to make it easy to share your memories.

Send flowers to the Fowler family.