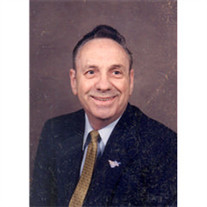 Dr. Randall A. Taylor, 84, of Point Pleasant, died Monday, February 27, 2012 at the Cleveland Clinic Foundation in Cleveland, Ohio. He was born October 16, 1927, in Huntington, WV, a son of the late Thomas Taylor and Betty (Roby) Taylor. Dr. Taylor was a graduate of Huntington East High School in 1946, Marshall College in 1949, with a Bachelor of Science Degree, and the Palmer College of Chiropractics D.C. with his Doctor of Chiropractic Degree in 1952. He interned at Spears Hospital, Denver, Colorado for one year. Dr. Taylor had been in practice in Point Pleasant for 50 years. He was a member of the West Virginia Chiropractic Society, Mason County Medical Society, and had staff privileges at Pleasant Valley Hospital from 1988 until retirement. He served two terms as West Virginia State Senator from 1965 thru 1972. While serving as State Senator he was a member of the Judiciary Committee, Chairman of the Health Committee, and Vice Chairman of the Educational Committee. He also was a member of the Masonic Order, Shriner, Kentucky Colonel, and the Odd Fellows Lodge. In addition to his parents, he was preceded in death by his daughter, Sheila Riehl; three brothers, Charles Taylor, Avalon C. Taylor, and twin brother Dr. Grandell A. Taylor; one sister, Genevieve Taylor; and his wives, Reba Jane (Ellis) Taylor; and Carolyn (Long) Taylor. He is survived by his wife, Shirley Ann (Sall) Taylor of Point Pleasant; a step daughter, Roxanne (Jeff) Dawson of Point Pleasant; grandchildren, Justin (Amber) Craig of Louisville, KY, and Myra (Ernie) Cook of Lancaster, OH; one step granddaughter, Krystle Rose of Columbus, OH; seven great grandchildren; and multiple nieces and nephews. A funeral service will be held at 11 a.m. Friday, March 2, 2012, at the Wilcoxen Funeral Home in Point Pleasant with Rev. Marshall Bonecutter officiating. Burial will follow at the Kirkland Memorial Gardens in Point Pleasant. Visitation will be from 6-8 p.m., Thursday at the funeral home. Online condolences may be made at www.wilcoxenfuneralhome.com.

The family of Dr. Randall A. Taylor created this Life Tributes page to make it easy to share your memories.

Send flowers to the Taylor family.