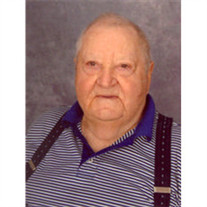 Emerson "Gene" Mayes, of Apple Grove, WV, born July 12, 1926, passed away Tuesday, August 30, 2011 surrounded by family at Cleveland Clinic in Cleveland, Ohio. Gene was a devoted husband, father, grandfather and friend. He was a Christian and... View Obituary & Service Information

The family of Emerson "Gene" Mayes created this Life Tributes page to make it easy to share your memories.

Send flowers to the Mayes family.