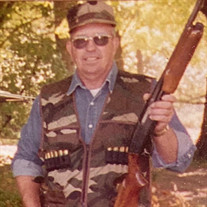 Everett Lee Jeffers, 71, of Hurricane, WV, formerly of Southside, passed away Saturday, December 11, 2021, at home. He was born July 3, 1950, in Point Pleasant, a son of the late William Clayton Jeffers and Virginia Mae (Gardner) Jeffers. In addition to his parents, he was preceded in death by a sister, Clara Belle Jeffers; and brothers, James Richard Jeffers, Harold Leroy Bailes, Charles Edward Jeffers and William Junior Jeffers. Everett alongside his brothers, Richard, Charles and Hanley had a bluegrass band called "The Rocky Mountain Boys" for many years. They were well known in the community and brought great entertainment to all around. Everett was very much an outdoorsman, he loved hunting and fishing. From the woods and water to the kitchen table he could do it all creating some of the most tasty meals. He is survived by two daughters and sons-in-law, Kelly L. and Larry Hodges of Hurricane and Teresa Sue and Gary Holton of Gallipolis Ferry; four grandchildren, Hailey Elizabeth Jeffers of Hurricane, Lisa Danielle (Jamison) Reeves of Sayre, PA, LaHanna Mariah Clonch (Justin Evans) of Lavalette, WV and Rachelle Brooke Clonch (J.C. Hill) of Ashton; seven great-grandchildren, Natali, Parker, Carson, Gavin, Brogan, Kaisley and Ellison; and a brother, Kenneth Hanley Jeffers of Southside. A funeral service will be held at 1 p.m. Wednesday, December 15, 2021, at the Wilcoxen Funeral Home in Point Pleasant. Burial will follow at the Hoschar Cemetery in Southside. The family will receive friends two hours prior to the funeral service Wednesday at the funeral home. Condolences may be expressed to the family and memories may be shared by visiting www.wilcoxenfuneralhome.com.

Everett Lee Jeffers, 71, of Hurricane, WV, formerly of Southside, passed away Saturday, December 11, 2021, at home. He was born July 3, 1950, in Point Pleasant, a son of the late William Clayton Jeffers and Virginia Mae (Gardner) Jeffers. In... View Obituary & Service Information

The family of Everett Lee Jeffers created this Life Tributes page to make it easy to share your memories.

Send flowers to the Jeffers family.