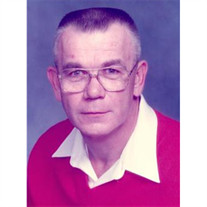 Fred Robert Wiskow, 76, of Gallipolis Ferry, died Wednesday, September 24, 2014, at Cabell Huntington Hospital in Huntington, WV. He was born December 17, 1937, in Stetien, Germany, a son of the late Werner Helmunt Wiskow and Margete (Nacht) Wiskow. Fred was retired with 28 years service from Timkens Roller Bearings. In addition to his parents, he was preceded in death by a son, Robert Badgley; one sister, Margete Wiskow; and a brother, Helmut Wiskow. Fred is survived by his wife, Mary N. (Richardson) Wiskow of Gallipolis Ferry; and two grandchildren, Steven Mills of Gallipolis Ferry and Stephanie Ewing of Atkinson, NC. A funeral service will be at 10 a.m., Monday, September 29, 2014, at Wilcoxen Funeral Home, in Point Pleasant with Pastor Don Saxton officiating. Burial will follow at the Glen Rest Memorial Estates, in Reynoldsburg, OH. Visitation will be from 4-6 p.m., Sunday at the funeral home. Online condolences may be made at www.wilcoxenfuneralhome.com.

The family of Fred Robert Wiskow created this Life Tributes page to make it easy to share your memories.

Send flowers to the Wiskow family.