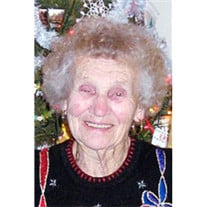 Harriett S. Jackson, 99, of Wildwood Crest, New Jersey, passed away Wednesday, December 21, 2011 at Holzer Assisted Living in Gallipolis, Ohio. Harriett had recently moved here to be close to her son George. She had lived in Wildwood Crest, New Jersey since 1917. Always active, she was a member of the Eastern Star, Past President of the Cedarettes of Cape May County, a charter member of the Deborah Heart and Lung Center and a teller at the Union Trust Company for many years. She was born April 11, 1912 in Philadelphia, PA, a daughter of the late Fredrick Oswald Stocker and Edith Richardson. In addition to her parents, she was preceded in death by her husband, Howard Jackson; and stepfather, Millard Richardson. Harriett is survived by her son and daughter-in-law, George and Lauretta Jackson of Point Pleasant, WV; two grandsons, Robert Jackson of Point Pleasant, WV and Bruce (Erin) Jackson of Hurricane, WV; two great grandsons, Cole and Connor Jackson; her older sister, Catharine Vickrey, age 101, who resides in a senior care center in Troy, Missouri near a niece Bernice (Stocker) Lindberg. Harriett certainly loved the Wildwoods and her many nieces and nephews of the extended Stocker family. A memorial service will be held at the convenience of the family with burial at the Fairview Cemetery, Cape May Court House, NJ. At Harriett's request, memorial donations may be made to Wildwood Crest Rescue Squad, 9300 Pacific Ave., Wildwood Crest, NJ 08260 or Wildwood Crest Vol. Fire Department, 7100 Pacific Ave., Wildwood Crest, NJ 08260 or Crest Community Church, 5901 Pacific Ave., Wildwood Crest, NJ 08260. Arrangements are under the direction of the Wilcoxen Funeral Home in Point Pleasant, WV. Online condolences may be made at www.wilcoxefuneralhome.com.

The family of Harriett Beatrice Jackson created this Life Tributes page to make it easy to share your memories.

Send flowers to the Jackson family.