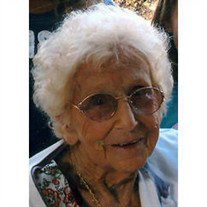 Helen Louise Caynor, 94, of Point Pleasant, went home to be with her Lord on Sunday, August 21, 2011 at Pleasant Valley Nursing and Rehabilitation Center. She was born May 23, 1917 in Henderson, WV, a daughter of the late James Thomas Mayes... View Obituary & Service Information

The family of Helen Louise Caynor created this Life Tributes page to make it easy to share your memories.

Helen Louise Caynor, 94, of Point Pleasant, went home to be with...

Send flowers to the Caynor family.