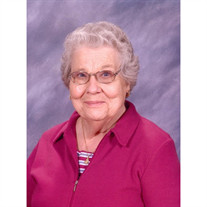 Helen "Faye" Holmes, 89, of Point Pleasant, entered into the presence of her heavenly father Thursday, March 14, 2019, at Ohio State University Wexner Medical Center in Columbus, OH. She was born June 10, 1929, in Whitesburg, KY, a daughter of the late J. D. Fairchild and Bonnie Pearl (Shackelford) Fairchild. Faye was a member of the Point Pleasant Presbyterian Church where she was the former secretary, elder and served in many aspects of the church. In addition to her parents, she was preceded in death by her husband, Lloyd D. "Croppie" Holmes; a sister, Eleanor Lucas; and brother, Jack R. Fairchild. She is survived by her daughters and sons-in-law, Linda and Dale Miller and Judy and Larry Hensley of Point Pleasant; six grandchildren, Shane (Elishia) Miller of Point Pleasant, Paige (Trent) Roush of Point Pleasant, Kevin Miller of Summersville, NC, Craig (Janine) Hensley of Miami, FL, Andrea (Jim) Henderson of Henderson, and Brad (Jamie) Hensley of Barboursville; and 13 great-grandchildren, Alex Hensley, Lauren Hensley, Lexi Watkins Lovejoy, Braxton Watkins Lovejoy, Kate Henderson, Kira Henderson, Parker Henderson, Lexy Hensley, Karly Hensley, Ariat Rollins, Cierra Rollins, Liam Roush and Chrystian Roush. The family would like to give a special thank you to caregivers Ann Lyons and Donna Browning for their kindness and care given during their mother's illness. A funeral service will be 1 p.m. Monday, March 18, 2019, at Wilcoxen Funeral Home in Point Pleasant with Rev. John Holland officiating.  Burial will follow at Suncrest Cemetery in Point Pleasant.  The family will receive friends two hours prior to the funeral service Monday at the funeral home. Condolences may be expressed to the family and memories may be shared by visiting www.wilcoxenfuneralhome.com.

The family of Helen "Faye" Holmes created this Life Tributes page to make it easy to share your memories.

Helen &quot;Faye&quot; Holmes, 89, of Point Pleasant, entered into the...

Send flowers to the Holmes family.