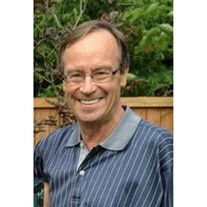 James M. Casey, 69, of Point Pleasant, WV, died on October 26, 2018, at the Ohio State University Hospital after a long illness.  He was born April 3, 1949, in Parsons, WV, to Leo A. and Elizabeth (Blackman) Casey.After serving in the 101st Airborne in Vietnam, James graduate from the Ohio State University with a degree in journalism and went on to attend West Virginia University Law School.He practiced law and was active in state and local politics.  Throughout his career, he humbly tried to help his community and all who lived in it.  He wanted to make the world a more just place because he truly, deeply cared about people.As a neighbor, friend, brother, and father, he will be remembered most for his generosity of spirit, kindness, loyalty, and forgiveness.  He will also be missed for his quick wit and easygoing demeanor.  He was a good friend, and he didn't have a mean bone in his body.He is preceded in death by his mother, father, and sisters Jo Ellen Brennan and Mary Ann.  He is survived by his sister Elizabeth Pritchard and brother Patrick, son John and daughter Marianne, and countless friends and loved ones whose lives he has touched over the years.A memorial service will be held Saturday, November 3 at 1 p.m. at Wilcoxen Funeral Home in Point Pleasant with a reception to follow at the Chef House.  In lieu of flowers, donations should be made to the American Civil Liberties Union (aclu.org).Condolences may be expressed to the family and memories may be shared by visiting www.wilcoxenfuneralhome.com.

The family of James M. Casey created this Life Tributes page to make it easy to share your memories.

Send flowers to the Casey family.