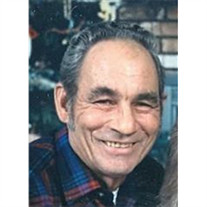 James Washington Legg, 71, of Thurman, OH, died Saturday, February 2, 2013, at Abbyshire Place in Bidwell, OH. He was born February 27, 1941, in Huntington, WV, a son of the late George Washington Legg and Lillian Dell (Waugh) Legg. James was a retired welder from OKan Dock and Marine. He served his country in the Army, was a member of the North American Hunting Club , and was an outdoorsman who loved to hunt. In addition to his parents, he was preceded in death by a granddaughter. James is survived by his wife, Sherrie Sue (Arrowood) Legg of Thurman; two sons, Randy and wife Charleen Codner of Sandusky, OH, and Ronnie and wife Kim Codner of Streetsboro, OH; a daughter, Tracy Legg of Warren, OH; two stepsons, Jason (Michelle) Pope of Erlanger, KY and Ben Pope of Thurman; ten grandchildren; one step grandson; and eight great grandchildren. A funeral service will be held at 11 a.m., Thursday, February 7, 2013, at Wilcoxen Funeral Home in Point Pleasant, WV, with Pastor George Vastine officiating. Burial will follow in the Arrowood Family Cemetery at Centerville, Ohio, where military graveside rites will be given by the West Virginia Honor Guard and American Legion Post No. 23 of Point Pleasant. Visitation will be from 6-8 p.m., Wednesday at the funeral home. Online condolences may be made at www.wilcoxenfuneralhome.com.

The family of James Washington Legg created this Life Tributes page to make it easy to share your memories.

Send flowers to the Legg family.