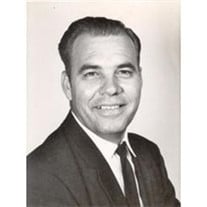 James Lewis Thompson, 86, of Gallipolis Ferry, husband of Arlene (Winkler) Thompson, died Saturday, November 10, 2012, at home. He was born October 4, 1926, in Lenore, WV, a son of the late John Issiac Thompson and Lena (Blankenship) Thompson. James was a Navy Veteran serving with the Seabee's during World War II at Okinawa. He retired in 1981, as a maintenance worker from Kaiser Aluminum with 22 years service, was a member of United Steelworkers Union No. 5668, Local Mine Workers No. 17, and was a 32 degree Mason with Minturn Lodge No. 19 AF & AM of Point Pleasant. He also enjoyed many years of Country and Western Square Dancing. In addition to his parents, he was preceded in death by four sisters, Alice, Mary, Stella and Sue; and a brother, Kendell. Surviving in addition to his wife, are his daughter, Linda Leach of Gallipolis Ferry; three grandchildren, Amber Leach, Shilo (Betty) Leach, and Ashley (Bobby) Massie; four great grandchildren, Bayleigh Leach, Riley and Gavin Massie, and Beckham Leach; four brothers, John (Edna) Thompson of Point Pleasant, Russell (Ella Vay) Thompson of Logan, WV, David Thompson of Virginia, and Jimmy (Eliza) Thompson of Logan, WV; and four sisters, Jo (Dennis) Crone of California, Belva Browning of Omar, WV, Diana (Earl) Setser of Omar, WV, and Penny (Ralph) Santos of Omar, WV. A funeral service will be held at 1 p.m., Wednesday, November 14, 2012 at Wilcoxen Funeral Home in Point Pleasant with Pastor Dean Warner officiating. Burial will follow at the Balls Chapel Cemetery in Ashton, WV, where Military graveside rites will be given by the Navy Honor Guard and American Legion Post No. 23 of Point Pleasant, and Masonic graveside rites by Minturn Lodge No. 19 AF & AM of Point Pleasant. Visitation will be from 6-8 p.m., Tuesday, at the funeral home. In lieu of flowers the family suggests donations made to: Cancer Research, c/o American Cancer Society, 611 7th Avenue, Suite 101, Huntington, WV 25701 or by calling 304-523-7989. Online condolences may be made at www.wilcoxenfuneralhome.com.

The family of James Lewis Thompson created this Life Tributes page to make it easy to share your memories.

Send flowers to the Thompson family.