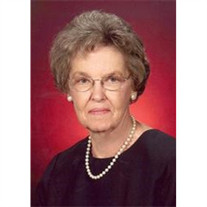 Jean Ann (Bailey) Cobb, 79, of Point Pleasant, formerly of Sissonville, WV, was ushered into the presence of her Lord on Sunday evening, October 6, 2013, at the Emogene Dolin Jones Hospice House of Huntington. She was born December 25, 1933, in Sissonville to the late Charles Leon Bailey and Louisa (Sayre) Bailey. Jean Ann faithfully attended the Goldtown Community Church while living the majority of her life in Sissonville and then attended the New Hope Bible Bapitst Church after moving to Point Pleasant. She was retired from General Motors in Charleston as well as the Bank of Sissonville. Jean Ann so enjoyed making quilts, crafts, working in her flower garden, watching WVU football, Nascar racing and the enjoyment of going to an auction, and or listening to one of her favorite quartets or choirs sing. Her most treasured gifts were her children, grandchildren and great-grandchildren, and the love and passion of helping someone in need. Her family and friends who had the opportunity to be part of Jean Ann's life will cherish many wonderful memories. In addition to her parents, she was preceded in death by her husband, Robert "Bob' Dale Cobb Sr. She is survived by one son, Robert "Bobby" Cobb Jr. and wife Donna of Cheshire, OH; a daughter, Lisa Ann (Cobb) Green and husband Richard of Fraziers Bottom; four grandchildren, Matthew (Candy) Cobb of Axis, AL, Robby (Erin) Cobb of Raleigh, NC, Daniel (Linnea) Cobb of Axis, AL and Tyler (Roxanne) Green of Fraziers Bottom; seven great-grandchildren, Nick Cobb, Clint Cobb, Jack Cobb, Gannon Cobb, Hayden Cobb, Jayden Marie Green, and one due any day Rocky Green; two step-grandchildren, Andrea (Andy) Hall of Point Pleasant, and Jonathan Henson of Huntington; one step-great-grandchild, Callie Hall; a brother and sister-in-law, Jimmy and Linda Bailey of Sissonville; one sister and brother-in-law, Helen and Art Moss of Cross Lanes, along with several additional brothers-in-law, sisters-in-law, nieces, nephews and a host of friends. A Celebration of Life Service will be held at 11 a.m., Thursday, October 10, 2013, at Wilcoxen Funeral Home, 2226 Jackson Ave., Point Pleasant with Rev. Al Mendez officiating. Burial will follow in the Tyler Mountain Memory Gardens in Cross Lanes. Visitation will be held Wednesday, October 9, 2013, from 5 to 8 p.m. at the funeral home. In lieu of flowers, memorial contributions may be made in memory of Jean Ann Cobb to the Emogene Dolin Jones Hospice House, 3100 Staunton Road, Huntington, WV 25702. Online condolences may be expressed at www.wilcoxenfuneralhome.com.

Jean Ann (Bailey) Cobb, 79, of Point Pleasant, formerly of Sissonville, WV, was ushered into the presence of her Lord on Sunday evening, October 6, 2013, at the Emogene Dolin Jones Hospice House of Huntington. She was born December 25, 1933,... View Obituary & Service Information

The family of Jean Ann Cobb created this Life Tributes page to make it easy to share your memories.

Send flowers to the Cobb family.