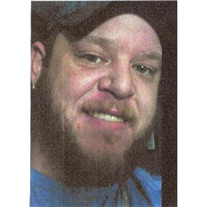 Jeremy Ray Ogier, 37, of Point Pleasant, died Saturday, October 28, 2017, at the Emogene Dolin Jones Hospice House, Huntington, WV. He was born June 24, 1980, in Point Pleasant, a son of the late Jeana F. (Jones) and Larry Ray Ogier of Point Pleasant. Jeremy was a graduate of Point Pleasant High School Class of 1998. In addition to his mother, Jeana F. (Jones) McCoy, he was preceded in death by maternal grandparents, Faye Jones and Sid Jones Sr. Jeremy is survived by his father and stepmother, Larry R. and Donna Ogier of Point Pleasant; two sons, Jeremiah Tre Ogier and Jacob Colton Ogier of Point Pleasant; a daughter, Chloe Michelle Ogier of Point Pleasant; and fiancee, Leona McDowell of Crown City, OH. He is also survived by his stepfather, Roger McCoy of Mason; stepbrother, Adam Beard of Nelsonville, OH; stepsister, Rebecca Hill of Huntington; a special sister, Nancy Adams of Huntington; two uncles, Bubby Jones and Jeff Jones of Gallipolis Ferry; paternal grandmother, Peggy Duncan of Florida; and several aunts and uncles. The family would like to give a special thank you to Becky Rainey for her help during this time. A funeral service will be 1 p.m. Wednesday, November 1, 2017, at Wilcoxen Funeral Home in Point Pleasant, with Pastor Joe Nott officiating. Burial will follow at Zion Cemetery in Gallipolis Ferry. The family will receive friends one hour prior to the funeral service Wednesday at the funeral home. Condolences may be expressed to the family and memories may be shared by visiting www.wilcoxenfuneralhome.com.

The family of Jeremy Ray Ogier created this Life Tributes page to make it easy to share your memories.

Send flowers to the Ogier family.