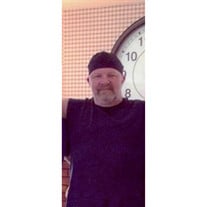 Keith Edward Pearson, 62, of Point Pleasant, died Friday, January 12, 2018, at Cabell Huntington Hospital in Huntington, WV. He was born December 24, 1955, in Marysville, OH, a son of the late Leo Edward Pearson and Eulah M. (Thorne) Pearson of Albany, OH. Keith was a retired heavy equipment operator from the AEP Philip Sporn Plant. He was a graduate of Point Pleasant High School Class of 1974 and a member of American Legion Post 23 of Point Pleasant. In addition to his father, he was preceded in death by a brother, Edward L. Pearson. Keith is survived in addition to his mother, by two sons and daughters-in-law, Keith E. Pearson II and wife Kandice of Birmingham, AL and Jonathan Michael Pearson and wife Autumn of Ona, WV; a granddaughter, Karis Paige Pearson; three sisters, Faith Ann Pearson of Point Pleasant, Debra L. Freymuth of St. Louis, MO and Cheryl L. (Rod) Goh of Corbin, KY; and one uncle, Ralph (Rena) Thorne of Marietta, OH. In honoring Keith's wishes there will be no public services.  Donations may be made in memory of Keith to www.gofundme.com/donate-in-memory-of-Keith-Pearson, funds will be given to the Stuart's Opera House in Nelsonville, OH.  Arrangements are under the direction of Wilcoxen Funeral Home in Point Pleasant. Condolences may be expressed to the family and memories may be shared by visiting www.wilcoxenfuneralhome.com.

The family of Keith Edward Pearson created this Life Tributes page to make it easy to share your memories.

Send flowers to the Pearson family.