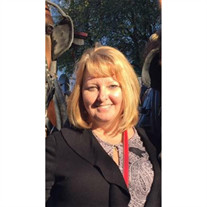 Kelly Renee Harper Ferguson "Ta Ta", 51, of Gallipolis Ferry, went home to be with her Lord Tuesday, December 11, 2018, at Charleston Area Medical Center in Charleston, WV. She was born September 18, 1967, in Gallipolis, Ohio, the daughter of the late Larry "Gene" Harper and Kay (Fisher) Harper of Gallipolis Ferry. Kelly was a graduate of Point Pleasant High School Class of 1985 and went on to receive her Masters Degree in Education from Marshall University.  She worked as an educator for twenty plus years for the Mason County Board of Education and for the past eight years was an educator at Lakin Correctional Center.  Kelly made a difference in the lives of so many children and adults.  She will surely be remembered most for her kind heart and giving spirit.  She always thought of others first.  She would want everyone to remember that kindness always counts. In addition to her father Larry "Gene" Harper, she was preceded in death by paternal grandparents, Cecil and Ruth Harper; maternal grandparents, Dallas and Faye (Duncan) Fisher; and an infant son, Reece Mitchell. She is survived by her loving husband of 12 years, Scott Ferguson, and was truly his Queen; her mother, Kay (Fisher) Harper; brother and sister-in-law, Kevin "Sonny" and Vanessa Harper; father-in-law and mother-in-law, Peter and Sandy Ferguson of Pliny; brother-in-law and sister-in-law, Jeff and Deb Kraschenewski of Pliny; six special nieces, Marlee and Ally Harper, Rachel and Jessie Kraschnewski, Kristen Ferguson and Megan Childers. She is also survived by one special boy, Braden Miller; a special uncle, Eddie Fisher and numerous special cousins and loving friends. Kelly also leaves behind a host of especially close educational and service personnel to carry on her legacy of making a difference in the lives of others. A funeral service will be 2 p.m. Saturday, December 15, 2018, at New Hope Bible Baptist Church in Point Pleasant, with Kevin Harper, Rev. Josh Fisher and Rev. Dean Warner officiating.  Burial will follow at Jordan Baptist Church Cemetery in Gallipolis Ferry.  Visitation will be from 6-8 p.m. Friday at New Hope Bible Baptist Church, 107 Robinson Street in Point Pleasant. In lieu of flowers, please donate to the Point Pleasant Homeless Shelter or Brandy Barkey's "Toys for Kids" program in her honor.  Also, in being a strong proponent, you may honor her by becoming an organ and tissue donor through the Donate Life program. Arrangements are under the direction of Wilcoxen Funeral Home in Point Pleasant.  Condolences may be expressed to the family and memories may be shared by visiting www.wilcoxenfuneralhome.com.

The family of Kelly Renee Ferguson created this Life Tributes page to make it easy to share your memories.

Send flowers to the Ferguson family.