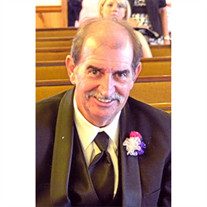 Kendal R. Ashworth, 66, of Ashton, went home to be with his Lord Sunday, March 4, 2018, at Cabell Huntington Hospital, Huntington, WV.He was born March 20, 1951, in Fraziers Bottom, WV, a son of the late Kenneth Edward Ashworth and Loreda "Susie" Ellouise (Deal) Ashworth Davis.Kendal was a gentle, kind soul, but more importantly, he was and remains a child of the living God.  Although he bore a heavy cross in his final years here on Earth, he bears that cross no longer. He has exchanged that cross of suffering for the crown of glory reserved for those who fight the good fight, finish the race, and keep the faith. His family takes deep comfort in the certainty that as Kendal exhaled his final breath here, he breathed in his first breath of the clear, sweet smelling air on the evergreen shores of the country of Heaven, his eternal home.Kendal was a member of Barton Chapel Church in Apple Grove,WV. He was a graduate of Hannan High School Class of 1969 and a retired operator for the West Virginia Division of Highways.In addition to his parents, he was preceded in death by a sister-in-law, Ruby Mae Ball.He is survived by his wife, Linda L. (Dunn) Ashworth of Ashton; son and daughter-in-law, Kenneth and Tara Ashworth of Gallipolis Ferry; two brothers and sisters-in-law, Dale and Jeannie Ashworth of Milton, WV and Sherman and Karen Ashworth of Fraziers Bottom; two sisters and brother-in-law, Sharon and Terry Yates of Milton and Carolyn Elkins of Milton; sisters-in-law and brother-in-law, Sharon and Carl Jordan of Apple Grove and Ruth Riggs of Apple Grove; and many nieces and nephews.A funeral service will be 11 a.m. Wednesday, March 7, 2018, at Barton Chapel Church with Pastor Ronald Long officiating.  Burial will follow at the Barton Chapel Cemetery in Apple Grove.  Visitation will be from 6-8 p.m. Tuesday at the Wilcoxen Funeral Home in Point Pleasant.Condolences may be expressed to the family and memories may be shared by visiting www.wilcoxenfuneralhome.com

The family of Kendal Ray Ashworth created this Life Tributes page to make it easy to share your memories.

Send flowers to the Ashworth family.