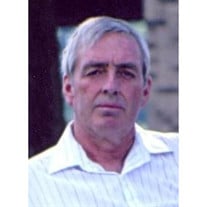 Larry R. Sayre, 66, of Letart, died Monday, January 23, 2017, at home with his family by his side. He was born November 5, 1950, in Henderson, WV, a son of the late Guy H. Sayre and Clara (Simpkins) Sayre of Point Pleasant. Larry was a member... View Obituary & Service Information

The family of Larry Ray Sayre created this Life Tributes page to make it easy to share your memories.

Send flowers to the Sayre family.