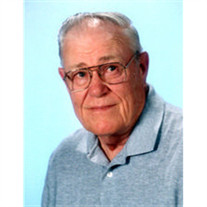 Leslie E. (Gene) Huffman, 80, of Leon, WV, went home to be with the Lord on Monday, January 2, 2012. He was born December 12, 1931 in Point Pleasant, a son of the late Harry H. and Chloe A. (Van Kirk) Huffman. Gene was a retired self employed water well driller and farmer. He attended Eddy Chapel Church, loved farming and he had a great love for nature. He also served his country during the Korean War with the United States Army. In addition to his parents, he was preceded in death by his first wife, V. Maxine (Francisco) Huffman; four brothers, Clarence Huffman, James Huffman, Jennings Huffman, and Charles Huffman; and a half brother, John Van Kirk. He is survived by his wife, Joan Niles Huffman of Leon; stepson, Richard Francisco of Point Pleasant; two stepdaughters, Pam (Randy) Heib of Letart and Martha Niles of Gallipolis Ferry; two stepsons, John (Yuri) Niles of Kyoto, Japan and Bill (Debra) Niles of Grove City, OH; a nephew, Bob (Cheryl) Huffman of McArthur, OH; a niece, Linda (Payton) Gambill of Port Richie, Florida; and several step grandchildren and step great grandchildren. Gene was a very loving husband and grandfather, he will be greatly missed. A funeral service will be held at 1 p.m., Thursday, January 5, 2012 at the Wilcoxen Funeral Home in Point Pleasant with Rev. John S. Holland and Pastor Johnny Hayman officiating. Burial will follow at the Eddy Chapel Cemetery in Leon. Military graveside rites will be given by the West Virginia Honor Guard and American Legion Post No. 23 of Point Pleasant. Visitation will be from 6-8 p.m., Wednesday at the funeral home. In lieu of flowers, donations may be made to: Point Pleasant Presbyterian Church, Joan Huffman Scholarship Fund, P. O. Box 415, Point Pleasant, WV 25550. Online condolences may be made at www.wilcoxenfuneralhome.com.

The family of Leslie Gene Huffman created this Life Tributes page to make it easy to share your memories.

Send flowers to the Huffman family.