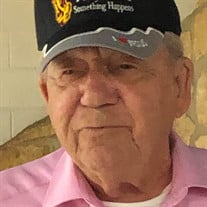 Marshall Gene Bonecutter, 87, of Point Pleasant, passed away Sunday, December 26, 2021, at home. He was born August 24, 1934, in Henderson, a son of the late Raymond Bonecutter and Sylvia Inez (Gaskins) Bonecutter. In addition to his parents, he was preceded in death by a granddaughter, Summer Ann Bonecutter; brother, Buerl Bonecutter; and sisters, Ileene Chapman and Betty Kanvale. Marshall was the Pastor and founder of the House of Praise and Worship Church in Point Pleasant. He honorably served his country in the United States Marine Corps and was a member of the Marine Corps League and American Legion Post 23 of Point Pleasant. He also served his community; he was a former City of Point Pleasant councilman, volunteer firefighter, auxiliary police officer and chaplain for numerous organizations. He retired with 30 1/2 years service from the Ford Motor Company. He is survived by his wife of 65 years, Betty Louise (Reynolds) Bonecutter of Point Pleasant; daughters and sons-in-law, Roxanna and Bryan Kovacevich of Lorain, OH and Susan and Ron Howell of Lorain; a son and daughter-in-law, Marshall Gene Jr. and Nancy Bonecutter of Point Pleasant; seven grandchildren, Lisa Davila, Teresa (Will) Clark, Ryan (Jason) Shaw, Mitchell Bonecutter, Ricky (Tatina) Bryner, Josh (Beth) Bonecutter and Jeremiah (Noelle) Kovacevich; 17 great-grandchildren and 1 great-great-grandchild. A funeral service will be held at 1 p.m. Friday, December 31, 2021, at the House of Praise and Worship Church in Point Pleasant, with Brother Gig Page and Sister Renee Plants officiating. Burial will follow at the McWhorter Cemetery in Milton, WV, where military graveside honors will be given by the Marine Corps Honor Guard and the Marine Corps League. The family will receive friends two hours prior to the funeral service Friday at the church. Wilcoxen Funeral Home in Point Pleasant is in charge of arrangements. Condolences may be expressed to the family and memories may be shared by visiting www.wilcoxenfuneralhome.com.

Marshall Gene Bonecutter, 87, of Point Pleasant, passed away Sunday, December 26, 2021, at home. He was born August 24, 1934, in Henderson, a son of the late Raymond Bonecutter and Sylvia Inez (Gaskins) Bonecutter. In addition to his parents,... View Obituary & Service Information

The family of Marshall Gene Bonecutter created this Life Tributes page to make it easy to share your memories.

Send flowers to the Bonecutter family.