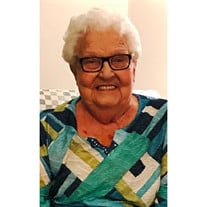 Martha "Carolyn" Childs Wilson, age 87, formerly of Point Pleasant, WV, passed away after a long illness on Friday, June 7, 2019 at Embrace Hospice House in Myrtle Beach, SC.  She was born on February 10, 1932, in Mason County, daughter of Harry and Gladys Beaver Childs. In addition to her parents, she was preceded in death in 2000 by the love of her life, her husband of 47 years, John A. "Andy" Wilson. She was also preceded in death by her step-father, Richard Dow, a granddaughter, Ginny Catherine Wilson, step-sisters Charlotte Armstrong and Jean Kimes, and a step-brother Charles Dow. She is survived by her daughter, Gretchen (Tom) Baarman of SC, a son, John (Cathy) Wilson II of Pt. Pleasant, four grandchildren, Courtney (Terry) Kountz of South Carolina, Kelly Baarman (fiance, Andrew Markham) of South Carolina, Robert Wilson of Pt. Pleasant, Eli (Jessie) Wilson of Gallipolis Ferry and eight great grandchildren.   Also surviving are two sisters, Peggy Jane Marshall of California, Betty Keeter of Arkansas, and step-sister Doris (Bob) Johnson of Ohio. Carolyn graduated from Point Pleasant High School in 1949.  She worked at several jobs in the Point Pleasant area and went to work for Kaiser Aluminum of Ravenswood, WV in 1957.  After  28 years of employment, Carolyn took early retirement to open Wilson's Catering, which she owned and operated for 15 years. She enjoyed reading and bowling for many years.  Carolyn left a strong legacy for her family of love and laughter, generosity, kindness and compassion to others.  Despite dealing with a long-term illness, people always commented on how positive and gracious she was.  Throughout her lengthy illness, her faith assured her that she would once  again be reunited with those she loved when God called her home. A celebration of Carolyn's life will be held at 3:00 on Friday, June 14 at Wilcoxen Funeral Home in Point Pleasant. Visitation will be held from 1:00 - 3:00 and graveside service will immediately follow at Suncrest Cemetery.  In lieu of flowers, donations in Carolyn's memory may be made to the American Lung Association, 55 W. Wacker Dr. Suite 1150, Chicago, IL 60601 or online at action.lung.org. Condolences may be expressed to the family and memories may be shared by visiting www.wilcoxenfuneralhome.com.

The family of Martha "Carolyn" Wilson created this Life Tributes page to make it easy to share your memories.

Send flowers to the Wilson family.