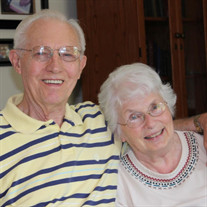 Mary Kathryn Gessel Hilbert, 92, of Point Pleasant, passed away on Sunday, February 13, 2022 after a long illness. She has joyfully reunited with her beloved husband of almost 70 years, John, who passed away in April of 2020. Mary was born in Saint Albans, WV on May 27, 1929, to Louis Oliver and Lethea Abilene Anderson Gessel. She had one older brother, Jack. At the age of three, Mary lost her mother to a tragic drowning accident. After several years, her father was remarried to Agnes Thornton and soon after two more siblings were born-Jane and Tom Gessel. Mary grew up in Saint Albans and after graduating from Saint Albans High School, she went on to earn her RN degree from The Saint Francis School of Nursing in Charleston, WV. After graduation, while working as a nurse at Saint Francis Hospital, Mary met her future husband John who was visiting a friend in the hospital. After a short courtship, they married on May 12, 1950 in Dunbar, WV. They lived in the Dunbar/Saint Albans area for nine years and it was there that their first child, a son they named Jeffrey Gessel was born in 1955. Five years later they moved to Point Pleasant and in 1963, their daughter, Lynda Jane was born. Mary had several different nursing jobs but once the family settled in Point Pleasant, she began working for the Mason County Health Department as a Health Nurse and worked there for more than 20 years. Mary was a dedicated wife and mother as well as a full-time nurse. She took good care of her family. She also loved her church-the Point Pleasant Presbyterian Church where she served in the Presbyterian Women's ministry and sang in the church choir. Mary was preceded in death by her husband, John, as well as her parents and brothers, Jack Gessel and Tom Gessel. She is survived by her children, Jeffrey (Deborah) Hilbert of Point Pleasant and Lynda (Ron) Cremeans of Marietta, Ohio; and her sister, Jane Graham of Parkersburg, WV. She also leaves five grandchildren, Andrea (Dan) Rogers of Austin, TX, Joel Hilbert of Point Pleasant, Jonathan Cremeans of New York, New York, Samuel Cremeans of Marietta, Ohio and Koren (Matt) Custer of Willow Springs, NC; and two great-grandchildren, Logan and Mary Joan Custer. A funeral service will be held at 11:30 a.m. Saturday, February 19, 2022, at the Wilcoxen Funeral Home in Point Pleasant, with David Jackson officiating. Burial will follow at Kirkland Memorial Gardens in Point Pleasant. The family will receive friends one hour prior to the funeral service Saturday at the funeral home. Condolences may be expressed to the family and memories may be shared by visiting www.wilcoxenfuneralhome.com.

Mary Kathryn Gessel Hilbert, 92, of Point Pleasant, passed away on Sunday, February 13, 2022 after a long illness. She has joyfully reunited with her beloved husband of almost 70 years, John, who passed away in April of 2020. Mary was born... View Obituary & Service Information

The family of Mary Kathryn Hilbert created this Life Tributes page to make it easy to share your memories.

Send flowers to the Hilbert family.