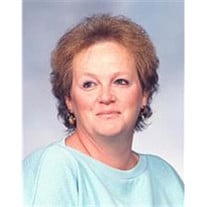 Mary Eileen McNutt, 63, of Point Pleasant, died Monday, February 18, 2013, at Ohio State University Medical Center, Columbus, Ohio. She was born November 6, 1949, in Westerly, Rhode Island, a daughter of the late Thomas Howard Peabody and Hazel May (Drake) Peabody. Mary was a homemaker. In addition to her parents, she was preceded in death by her husband, Michael Albert McNutt Sr.; and two brothers, Leon Drake and Frank Anyzeski. Mary is survived by one daughter, Michele McNutt of Point Pleasant; a son and daughter-in-law, Michael and Diane McNutt of Leon, WV; two grandchildren, Cheyenne McNutt and Dakota McNutt of Leon; three sisters, Nancy (Bob) Thompson of Luck, WI, Susan (David) Pelcher of Rhode Island, and Rosalind Peabody of Connecticut; and two brothers, John Peabody and Thomas Peabody of Connecticut. A visitation will be held from 6-8 p.m., Friday, February 22, 2013 at Wilcoxen Funeral Home in Point Pleasant. Burial will be at the convenience of the family. Online condolences may be made at www.wilcoxenfuneralhome.com.

The family of Mary Eileen McNutt created this Life Tributes page to make it easy to share your memories.

Send flowers to the McNutt family.