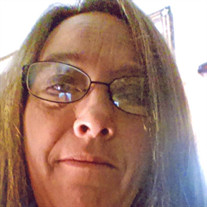 Melissa Ann (Woyan) Hooten, 47, of Sunbright, TN, formerly of Southside, WV, passed away Saturday, January 23, 2021, at the Big South Fork Medical Center in Oneida, TN. She was born October 22, 1973, in Point Pleasant, a daughter of the late John Arthur Woyan and Patricia Ann (Runion) Woyan of Gallipolis Ferry. In addition to her father, she was preceded in death by her husband, Carl Freddrick Hooton; a daughter, Naleigh Dale Hooton; maternal grandparents, Albert and Mary Runion; and paternal grandparents, Red and Carol Woyan. Melissa was a graduate of Point Pleasant High School Class of 1992 and a homemaker. She is survived by her mother Patricia; a daughter, Nevaeh Faith Hooton of Sunbright; one sister, Amy Jo (Bert) Flora of Southside; brothers, Jody A. (Megan Bowling) Woyan of Point Pleasant and Daniel R. Woyan of Gallipolis Ferry; companion, Daniel Lowe of Sunbright; eight additional children that she raised as her own; and three grandchildren that she loved as her own. She is also survived by nieces and nephews, Brandon and Darren Flora, Jacob, Jeremiah and Jordan Woyan, Kylee, Daniel and Payton Woyan, Rickey, Jonathon, Jack, Travis and Lita Hooton; and several aunts, uncles and cousins. A memorial service will be 1 p.m. Saturday, January 30, 2021, at Wilcoxen Funeral Home in Point Pleasant, with Rev. Robert Clonch officiating. Burial will be at the convenience of the family in the Woyan Cemetery on Woyan's Mountain, Southside. Condolences may be expressed to the family and memories may be shared by visiting www.wilcoxenfuneralhome.com.

The family of Melissa Ann Hooten created this Life Tributes page to make it easy to share your memories.

Send flowers to the Hooten family.