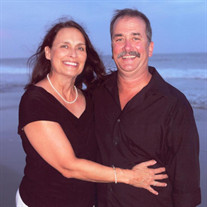 Rev. Michael Ray Lambert, 62, of Letart, West Virginia went home to be with his Lord Jesus Christ, on Saturday, July 3, 2021, at the Ohio State University James Cancer Hospital, in Columbus, Ohio, surrounded by his loving family. He was born on June 13, 1959, in Ashland, Kentucky to the late Raymond Lambert and Mary Jo (Hutchison) Lambert. He is survived by his wife of almost 40 years, Carolyn Joy (Rickard) Lambert, of Letart; his favorite daughter and son-in-law, Brigette and Tommy Taylor, of Winfield; his favorite son and daughter-in-law, Gabriel and Whitney Lambert, of Clarksburg; and his grandchildren Brooks, Blake, Aubree, Bryce and Carson who greatly love their Papaw. He is also survived by a sister and brother-in-law, Marie and Ron Hatfield, Mason, and a brother and sister-in-law, James "Rob" Lambert and Fran, Beverly, Ohio; mother-in-law, Betty C. Rickard, West Columbia; and additional brothers-in-law and sisters-in-law, Ronald Rickard, Jr., West Columbia, Daniel and Dawnetta Rickard, Robertsburg, and Timothy and Liz Rickard, West Columbia. He was a 1977 graduate of Wahama High School, after which he served in the United States Army with the HMS Co., 782nd Maintenance Battalion and held the rank of SP4. He served with the 82nd Airborne Division, at Fort Bragg, North Carolina and received the Army Commendation Medal. He enjoyed a career at American Electric Power as a welder. Michael was a member of the Peniel United Methodist Church where he attended as a young adult, married his high school sweetheart in 1981 and answered the call to preach the gospel of His Lord and Savior Jesus Christ. He served as pastor for 24 years and treasured his church families from Peniel United Methodist, The Union Charge, Leon United Methodist, Krebs Chapel United Methodist and First Baptist Church of Mason. The funeral service will be held at 11 AM, on Friday, July 9th, 2021, at First Baptist Church, 1456 2nd Street, Mason, West Virginia, with Pastor Mike Finnicum and Pastor Joe Johnson officiating. Burial will follow at the Graham Cemetery, in New Haven, WV, with military rites given by Stewart-Johnson V.F.W. Post #9926 of Mason and the West Virginia Army Honor Guard. Visitation will be held from 6 to 8 PM, on Thursday, July 8th, 2021, at First Baptist Church, Mason, West Virginia. Wilcoxen Funeral Home in Point Pleasant is in charge of arrangements. Condolences can be expressed to the family and memories may be shared by visiting www.wilcoxenfuneralhome.com

Rev. Michael Ray Lambert, 62, of Letart, West Virginia went home to be with his Lord Jesus Christ, on Saturday, July 3, 2021, at the Ohio State University James Cancer Hospital, in Columbus, Ohio, surrounded by his loving family. He was born... View Obituary & Service Information

The family of Rev. Michael Ray Lambert created this Life Tributes page to make it easy to share your memories.

Send flowers to the Lambert family.