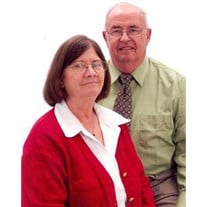 Nancy Ellen Eads, 65, of West Columbia, died Thursday, June 23, 2016, at the Emogene Dolin Jones Hospice House in Huntington. She was born September 14, 1950, in Ravenswood, WV, a daughter of the late Paul Robert Anderson and Peggy Dee (Riggs) Anderson. Nancy was a member of Heights United Methodist Church, where she was active with the United Methodist Women, Win One Sunday School Class and served on the church trustee board, nominations committee, council member-at-large, and assistant financial secretary. She was appointed by the Mason County Commission, as a representative of Mason County, to the Great Kanawha Valley Resource Conservation and Development Board and had served for 25 years with the Mason County Solid Waste Commission, where she was currently serving as chairperson. Nancy graduated from Wahama High School Class of 1968 and received an associate degree from Gallipolis Business College. She was also a member of the Point Pleasant Woman's Club. In addition to her parents, she was preceded in death by a sister, Peggy D. Bumgardner. She is survived by her husband, David A. Eads of West Columbia; a son and daughter-in-law, James Robert and Lindsey Eads of Liberty, WV; twin grandchildren, James Mason Eads and Jaelyn Michelle Eads; and one brother, Charles (Nancy) Anderson of Mason. A funeral service will be 1 p.m. Saturday, June 25, 2016, at Wilcoxen Funeral Home in Point Pleasant, with Rev. Charles Marker officiating. Burial will follow at Suncrest Cemetery in Point Pleasant. The family will receive friends two hours prior to the funeral service Saturday at the funeral home. In lieu of flowers, for those considering an expression of sympathy, contributions may be made to: Heights United Methodist Church Educational Trust Fund, 2016 North Main Street, Point Pleasant, WV 25550. Condolences may be expressed to the family and memories may be shared by visiting www.wilcoxenfuneralhome.com.

The family of Nancy Ellen Eads created this Life Tributes page to make it easy to share your memories.

Send flowers to the Eads family.