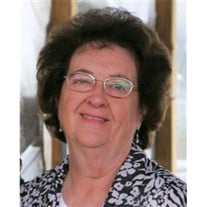 Nancy Margaret Powell, 73, of Gallipolis Ferry, WV, went home to be with her Lord Thursday, May 18, 2017, at her home. She was born August 2, 1943, in Robertsburg, WV, a daughter of the late Leonard Alexander Dowell and Letha Catherine (Lanier) Dowell. Nancy was a member of the Point of Faith Church in Point Pleasant. She was a graduate of Point Pleasant High School Class of 1960 and retired from Holzer Medical Center after 23 years service. In addition to her parents, she was preceded in death by an infant brother, Jerry Edwin Dowell. Nancy is survived by her husband of 55 years, Charles "Gene" Powell of Gallipolis Ferry; a daughter and son-in-law, Brenda and Michael Nowlin of Ashton; two sons and daughters-in-law, Bobby and Tammie Powell of Gallipolis Ferry and Steven and Ruby Powell of Leon; four grandchildren, Jason (Alicia) Powell, Jessica (Cody) Finley, James (Colleen) Nowlin and Jacob Nowlin; and four great-grandchildren, Logan Powell, Connor Powell, Dylan Finley and Joanna Finley. She is also survived by two sisters, Dorothy "Dottie" Cook of Point Pleasant and Roberta Kay (Glenn) Anders of Gallipolis, OH; three brothers, George Allen (Phyllis) Dowell of Point Pleasant, Dexter Ray (Nancy) Dowell of Gallipolis Ferry and Michael Lee Dowell of Jacksonville, NC; and a host of nieces and nephews. A funeral service will be 1 p.m. Saturday, May 20, 2017, at Wilcoxen Funeral Home in Point Pleasant, with Pastor Mark Mayes officiating. Burial will follow at Apple Grove Memorial Gardens in Apple Grove. The family will receive friends two hours prior to the service Saturday at the funeral home. Condolences may be expressed to the family and memories may be shared by visiting www.wilcoxenfuneralhome.com.

Nancy Margaret Powell, 73, of Gallipolis Ferry, WV, went home to be with her Lord Thursday, May 18, 2017, at her home. She was born August 2, 1943, in Robertsburg, WV, a daughter of the late Leonard Alexander Dowell and Letha Catherine (Lanier)... View Obituary & Service Information

The family of Nancy M. Powell created this Life Tributes page to make it easy to share your memories.

Send flowers to the Powell family.