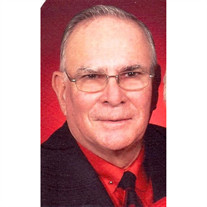 Rev. John D. Sallaz Sr., 79, of Gallipolis Ferry, went home to be with the Lord Wednesday, November 29, 2017, at Pleasant Valley Nursing and Rehabilitation Center in Point Pleasant. He was born September 24, 1938, in Gallipolis, OH, a son of the late Admiral Dewey Sallaz and Garnett D. (Lear) Sallaz. John was a retired minister who pastored various churches in several states and also had worked and retired from the City of Point Pleasant as a mechanic.  He was a member of Jordan Baptist Church at Gallipolis Ferry. John attended Point Pleasant High School and was a graduate of Midwestern Baptist College in Pontiac, MI where he received a bachelors degree in Theology. In addition to his parents, he was preceded in death by one sister, Wilma D. Wood; and a son-in-law, Richard S. Frans. John is survived by his wife, Patricia N. (Grimm) Sallaz of Gallipolis Ferry; a daughter, Tina M. Frans of Bidwell, OH; two sons, John D. Jr. (Rebecca) Sallaz of Point Pleasant and Randy L. (Cheryl) Sallaz of Huntington; two sisters, Ruth L. (Clarence) Holland of Gallipolis Ferry and Dorothy M. (Kenna) Rairdin of Ravenswood; nine grandchildren and thirteen great-grandchildren. A graveside service and burial will be 11 a.m. Saturday, December 2, 2017, at the Suncrest Cemetery in Point Pleasant, with Pastor Bo Burgess and Pastor Jonathan Pinson officiating. In lieu of flowers donations may be made to: Jordan Baptist Church, 2430 Clendenin Pike, Gallipolis Ferry, WV 25515.Arrangements are under the direction of the Wilcoxen Funeral Home in Point Pleasant. Condolences may be expressed to the family and memories may be shared by visiting www.wilcoxenfuneralhome.com.

Rev. John D. Sallaz Sr., 79, of Gallipolis Ferry, went home to be with the Lord Wednesday, November 29, 2017, at Pleasant Valley Nursing and Rehabilitation Center in Point Pleasant. He was born September 24, 1938, in Gallipolis, OH, a son of... View Obituary & Service Information

The family of Rev. John Dewey Sallaz Sr. created this Life Tributes page to make it easy to share your memories.