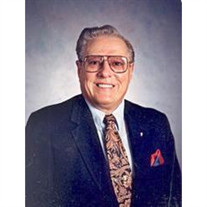 Rev. Orville Ray White, 83, of Point Pleasant, went home to be with his Lord on Tuesday, April 16, 2013, at St. Mary's Medical Center in Huntington, WV. He was born June 7, 1929, in Hinton, WV, a son of the late Elmer White and Leola (Lilly) White. Orville was a retired teacher from Mason County Schools, and a Methodist Minister serving various Methodist Churches in Mason County. He served his country in the United States Army, was a member of American Legion Post No. 23 of Point Pleasant, and also a member of the Masonic Order. In addition to his parents, he was preceded in death by his twin brother, Norville White; and one sister, Nadine Sydenstricker. Surviving are his wife, Margie Gay (Slayton) White of Point Pleasant; stepdaughter, Carolyn (Richard) Winters of Robertsburg, WV; one stepson, Larry (Shelby) Davis of Letart, WV; four step- grandchildren; Katie Jo (Ethan) Robertson of Point Pleasant, Joshua A. Davis of Letart, Jennifer (Danny) Noble of Hurricane, WV, and Steven Winters of Robertsburg; and three step-great grandchildren. A funeral service will be held at 11 a.m., Friday, April 19, 2013 at Wilcoxen Funeral Home in Point Pleasant with Rev. Nancy Hamm officiating. Burial will follow in the Forest Hills Cemetery at Letart, where military graveside rites will be given by the West Virginia Honor Guard and American Legion Post No. 23 of Point Pleasant. Visitation will be from 6-8 p.m., Thursday at the funeral home. Online condolences may be made at www.wilcoxenfuneralhome.com.

The family of Rev. Orville Ray White created this Life Tributes page to make it easy to share your memories.

Send flowers to the White family.