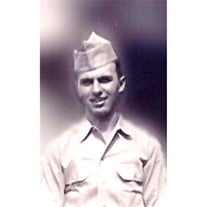 Richard J. "Dick" Lanier, 90, of Henderson, WV, passed away Saturday, June 29, 2019, at home. He was born June 6, 1929, in Beech Hill, WV, a son of the late Emma Lanier. Dick served his country honorably in the United States Army during World War II.  He was a self employed plumber, who owned Lanier Plumbing in Franklin County, OH and was a member of the Masonic Lodge and the Optimist Club both of Columbus, OH. In addition to his mother, he was preceded in death by a daughter, Cathy Lanier; two brothers; and two sisters. He is survived by his wife, Edna E. (Haynes) Lanier of Henderson; children, Steve Lanier of Columbus, Kevin (Beth) Lanier of Gallipolis Ferry, Connie Koch of Columbus, Rita (Roger) Carver of Adele, GA and Rhonda (Jim) Smith of Grove City, OH; a sister, Janet Chapman of Houston, TX; two brothers, Fred (Joyce) Lanier of Henderson and Larry (Janet) Lanier of Southside; five grandchildren; and 10 great-grandchildren. A funeral service will be 7 p.m. Wednesday, July 3, 2019, at Wilcoxen Funeral Home in Point Pleasant, with Pastor Charlie Dabney officiating.  Military honors will be given by the West Virginia Army Honor Guard.  The family will receive friends two hours prior to the funeral service Wednesday at the funeral home. Condolences may be expressed to the family and memories may be shared by visiting www.wilcoxenfuneralhome.com.

The family of Richard "Dick" Junior Lanier created this Life Tributes page to make it easy to share your memories.

Send flowers to the Lanier family.