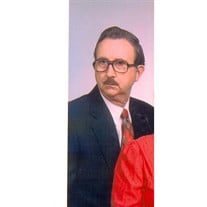 Robert D. "Bob" Hamm, 92, of Point Pleasant, went home to be with his Lord Thursday, January 11, 2018, at St. Mary's Medical Center in Huntington, WV. He was born June 26, 1925, in Summers County, near Hinton, WV, a son of the late William Luther Hamm and Mattie Jane (Lilly) Hamm. Bob joined the United States Navy and served during WWII. He served in the American, Atlantic and Pacific theaters. He served on three different Merchant Marine ships, the S.S. Eloy Alfado, S.S. Thomas Johnson and S.S. Joseph Parker from 1943 to 1946. One of the ships he was on was hit and badly damaged by an iceberg. He served in Canada, Iceland, Scotland, England, Northern and Southern France, Sicily, Italy, Africa, Panama, Philippines, Chile, and Eniwetok. After WWII ended, Bob returned to Hinton in 1946 and purchased a restaurant known as "The Kitchen" where he was owner and chief cook. Bob and Nancy were married the following year in Ashland, KY on March 18, 1947. They were blessed with two sons, William Howard "Bill" Hamm born December of 1947 and James Robert "Bob" Hamm born December of 1949. In 1949, Bob sold his restaurant and went back to work for the Kroger Co. and was transferred to Point Pleasant in January of 1951, where he served as meat manager. In 1957, Bob left the Kroger Co. and went into business for himself. He owned and operated Heights Market on North Main Street, which was mostly a meat market but also sold groceries and deli items which Bob made. His specialties included ham salad, cheese spread, BBQ, hotdog sauce, soups, spaghetti sauce and baked ham. He was also a great gardener. Bob was saved at a revival meeting in Quinwood, WV in 1950, and was baptized in Point Pleasant in February of 1952. Bob and Nancy joined Heights United Methodist Church on February 3, 1953. Bob was an active member of the church having taught the high school class and served as a trustee, along with serving on the Administrative Board, PPR committee and Lay Delegate to the District Conference. He was also a 60 year member of Minturn Lodge No. 19 A.F. & A.M. in Point Pleasant. He is survived by his wife of 70 years, Nancy Jo (Hayes) Hamm of Point Pleasant; two sons and daughters-in-law, Bill and Karen Hamm of Corbin, KY and Bob and Paula Hamm of Massillon, OH; five grandchildren, Bryan and wife Tonya of FL, Gretchen of CA, Ben and wife Whitney of AL, Jeremy and wife Stephanie of KY, Billie Jean and husband James of WV; three step grandchildren, ten great grandchildren; one brother and four sisters. A funeral service will be 1 p.m. Monday, January 15, 2018, at Wilcoxen Funeral Home in Point Pleasant, with Pastor Charles Marker and Rev. James Lewis officiating. Burial will follow at Kirkland Memorial Gardens in Point Pleasant. Military graveside honors will be given by the United States Navy Honor Guard and American Legion Post 23 of Point Pleasant. The family will receive friends two hours prior to the funeral service Monday at the funeral home. Condolences may be expressed to the family and memories may be shared by visiting www.wilcoxenfuneralhome.com.

The family of Robert D. Hamm created this Life Tributes page to make it easy to share your memories.

Send flowers to the Hamm family.