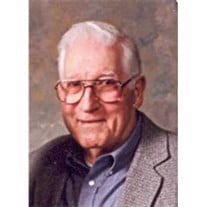 Roger Clark Paxton Sr., 89, of Gallipolis Ferry, WV, died Thursday, January 31, 2013 at Holzer Medical Center in Gallipolis, OH. He was born March 21, 1923, in Witcher Creek, Kanawha County, a son of the late Henery Clay Paxton and Allena (Jarrett) Paxton. He was orphaned at a very young age and was reared by his grandparents, John Henery Paxton and Mary Jane Paxton. Roger was a Christian, and attended Concord Baptist Church in Henderson, WV. He was a former employee of DuPont, had worked as a Valley Bell Dairy milkman; and retired from Kaiser Aluminum with 29 years service. He served his country during World War II in the Army Air Corps, was a charter member of the American Legion of Rand, WV, Past Chairman of the Jackson County Junior Fair Board, was an avid reader, loved watching Westerns, and enjoyed farming very much. In addition to his parents, he was preceded in death by one brother, Rev. John Paxton. Roger is survived by his wife of 65 years, Alice Jewell (Williams) Paxton; one daughter and son-in-law, Anna and Golden Herdman of Point Pleasant; son and daughter-in-law, Roger Clark and Audrey Paxton Jr. of Dunn, NC; four grandchildren, Craig Herdman of Santa Fe, New Mexico, Rhonda Herdman of Lafayette, LA, Roger (Venus) Paxton III of Dunn, NC, and Angela Paxton of Dunn, NC; and one great grandson, Wolfgang Paxton of Dunn, NC. A funeral service will be held at 1 p.m., Sunday, February 3, 2013, at Wilcoxen Funeral Home in Point Pleasant, with Rev. Bobby Woods officiating. Burial will follow in Concord Cemetery at Henderson. Visitation will be from 6-8 p.m., Saturday at the funeral home. Online condolences may be made at www.wilcoxenfuneralhome.com.

The family of Roger Clark Paxton Sr. created this Life Tributes page to make it easy to share your memories.