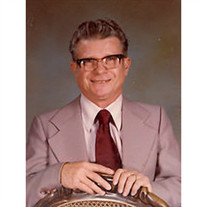 Roy Lewis Lloyd , 92, of Upland in Mason County, West Virginia, died after a brief and sudden illness Sunday, June 10, 2012. He is survived by his wife Elizabeth (Meadows) Lloyd and son David (Angie) of Upland and pre-deceased by first wife Maxine (Gibbs) Lloyd, mother of son Bill (Sharon) Lloyd of New Haven and daughter Marcia (Jim) Plants of Mt. Alto. Surviving stepchildren include Debbie Watterson (Mark) Czewski of Upland; Johnny (Terri), Charlie (Renee), and Rusty (Donna) Watterson, all of Apple Grove. Surviving grandchildren include Wynston and Abigail Lloyd of Upland, Jeremy JT(Heather) and Joel (Amber) Lloyd of New Haven, Jennifer (Lloyd) Board of Hartford, and Jessica Plants of Mt Alto. Surviving step-grandchildren include Rob (Stacey) Salvino of Murrells Inlet, SC, Joe (Angie) Salvino of Las Vegas, Nevada, Tara (John) Patrick of Flatwoods, Kentucky, Rachael Fox of Huntington, Trey and Hannah Watterson of Apple Grove, Alicia (David) Russell of Point Pleasant, Bethany, Derrick (Loren), and Garrett (Whitney )Watterson of Mason County, Megan and Morgan Watterson of Apple Grove. Six great-grandchildren and seven step-great-grandchildren also survive. Born March 19, 1920 in Mt. Alto, West Virginia to the late Luther Lloyd and Mattie Durst Lloyd, Roy was an only child. He spent his early youth in Ohio where the young family thrived until both parents became seriously ill. By age 7, he was sent to live with his Grandmother Durst on the family farm in West Virginia where food was plentiful, in an area and time when this was not always the case. A World War II Veteran, Mr. Lloyd was awarded the Bronze Star while serving in the 1st Infantry Division (Big Red 1) of the United States Army during the Battle of the Bulge. Immediately after the War and during the Nuremburg Trials in Germany, he briefly guarded Hermann Goering, second in command to Nazi leader, Adolph Hitler. Before returning home from military service in Europe, Roy relocated from Bavaria, Germany to the French Alps region of France where he was permitted to further his education at the University of Grenoble. An avid baseball player during his youth and into his early years before the War while attending Marshall College (later, University) in Huntington, Roy returned to school with the help of the G.I. Bill. He pursued his passion for learning over the years, completing his education and earning advanced degrees. A well-liked and respected educator, Mr. Lloyd retired with over 40 years as teacher and principal in the Mason, Jackson, and Wetzel county school systems. He remained active and engaged throughout the 30 years following retirement during which time he enjoyed traveling with family and friends; farming and raising Angus cattle; roaming fields and hills by foot and, later, by four-wheeler; and serving his beloved church as treasurer, until his death. Wit and compassion, charm and intelligence embodied this beloved gentleman who hailed from a bygone era. A true inspiration and treasure to all who knew him, Roy will be sorely missed. Funeral services will be held at Noon, Thursday, June 14, 2012 at Mount Zion Baptist Church in Fraziers Bottom (Upland), WV with Pastor Chuck Elkins and Rev. Robert Johnson officiating. Burial will follow in the Mount Zion Cemetery. Visitation will be from 6:00 to 8:00 PM Wednesday at the Wilcoxen Funeral Home in Point Pleasant and one hour prior to the service at the church on Thursday. The West Virginia Honor Guard and the American Legion Post #23 of Point Pleasant will perform a military graveside service. Grandchildren will serve as pallbearers: Joel and Jeremy Lloyd, Derrick, Garrett, and Trey Watterson and Rob Salvino. Contributions may be made in Mr. Lloyd's memory to the Alzheimer's Association at www.alz.org, the American Diabetes Association at www.diabetes.org, or a charity of one's choice. On-line condolences may be expressed at www.wilcoxenfuneralhome.com.

Roy Lewis Lloyd , 92, of Upland in Mason County, West Virginia, died after a brief and sudden illness Sunday, June 10, 2012. He is survived by his wife Elizabeth (Meadows) Lloyd and son David (Angie) of Upland and pre-deceased by first wife... View Obituary & Service Information

The family of Roy Lewis Lloyd created this Life Tributes page to make it easy to share your memories.

Send flowers to the Lloyd family.