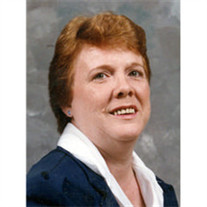 Rozita Cheryl Miller, 68, of Point Pleasant, died Thursday, September 15, 2011 at St. Mary's Medical Center in Huntington. She was born December 25, 1942 in Madison, WV, a daughter of the late Carlos Chambers and Edith (Lamp) Chambers. Rozita was a homemaker and member of the Lifeline Apostolic Church in Point Pleasant. In addition to her parents, she was preceded in death by her husband, Terry Miller; two brothers, Charles Chambers, and Meredith Chambers; and one sister, Barbara Barker. She is survived by three sons, William "Kelly" (Christina) Chambers of Fairmount, GA, Robbie Blackburn and family of Oklahoma and Scott Anthony McCallister and fiancee Regina Reed of Ivydale, WV; one daughter, Jackie Suzzete (Sean) Murphy of Simpsonville, SC; five grandchildren, Patrick Murphy, Shannon Murphy, Kelly Chambers, Harleigh Chambers, and Haleigh Chambers; a great grandson, Matheu Chambers; one brother, Harold Lee (Loraine) Chambers of Brounland, WV; two special nieces with whom she lived with, Diana Chambers and Patricia Chapman; and several nieces and nephews. Funeral services will be 1 p.m. Sunday, September 18, 2011 at the Lifeline Apostolic Church with Pastor Charles Birchfield officiating. Burial will follow at Wyoma Cemetery in Gallipolis Ferry. Visitation will be one hour prior to the service at the church on Sunday. Services are under the direction of the Wilcoxen Funeral Home. Online condolences may be made at www.wilcoxenfuneralhome.com.

The family of Rozita Cheryl Miller created this Life Tributes page to make it easy to share your memories.

Send flowers to the Miller family.