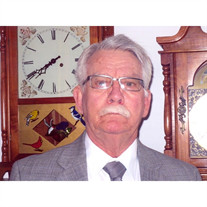 Sherman "Eddie" Long, 79, of Gallipolis Ferry, passed away Thursday, December 17, 2020, at his home after a long and heroic battle with cancer. He was born August 30, 1941, in Gallipolis Ferry, to Philip E. and Christina (Matthews) Long. In addition to his parents, he was preceded in death by a brother, James L. Long. He graduated from Rutland High School in Rutland, OH in 1959 and served as a seaman in the US Navy until 1963. He retired from Boilermaker's Local 667 and was a member of the Son's of the American Revolution, the American Legion and Minturn Lodge No. 19 of Point Pleasant. He was a talented woodworker, craftsman and fixer of all things. In his words, he was "jack of all trades and master of none", but to those who knew him, he was master of all. His favorite things were following Idletymes Bluegrass Band, Collecting Special things, his family and his pets. He is survived by his loving bride of 59 years, Linda (Harper) Long; three children, Nora Christine Franklin of Scottown, OH, Christopher (Shannon) Long of Grove City, OH, and Christana L. Long of Gallipolis Ferry; seven grandchildren, Trevor Franklin, Carmen (Rocco) Muriale, Philip Long, Ashlynn (John) Byran, Jessilynn Hill, Chrissanne Magdalene Long, and Connor Franklin. He is also survived by a brother, Robert E. Long; a sister, Tana (Long) Rainey; and several special nieces and nephews. A memorial service will be held at a later date. Arrangements are under the direction of Wilcoxen Funeral Home in Point Pleasant. The family requests in lieu of flowers and gifts that memorial contributions be made to the Mason County Animal Shelter, 1965 Fairground Road, Point Pleasant, WV 25550. Condolences may be expressed to the family and memories may be shared by visiting www.wilcoxenfuneralhome.com.

Sherman "Eddie" Long, 79, of Gallipolis Ferry, passed away Thursday, December 17, 2020, at his home after a long and heroic battle with cancer. He was born August 30, 1941, in Gallipolis Ferry, to Philip E. and Christina (Matthews) Long. In... View Obituary & Service Information

The family of Sherman Edward Long created this Life Tributes page to make it easy to share your memories.

Send flowers to the Long family.