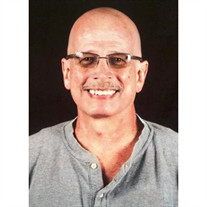 Stephen Darrell Becher, 60, of Apple Grove, WV, formerly of Charleston, went home to be with his Lord and Savior Jesus Christ, Saturday, September 23, 2017, surrounded by his loving and caring family. Steve was born March 20, 1957, in Charleston and graduated from Lincoln Junior High School and Stonewall Jackson High School, where he played football, ran track and was a member of the wrestling team. Playing football at Stonewall Jackson was one of the highlights of his life. After graduation, Steve began his working career as a teletype operator at the WV Department of Motor Vehicles (DMV) and then joined the Rite Aid Warehouse in Rock Branch, WV, where he retired with 34 years service. Steve was a student of all things "earth and space." He loved astronomy, world maps and globes, Star Trek and Star Wars. He also loved the outdoors, where he spent countless hours riding his mountain bike with good friends, shooting his black-powdered rifle and traveling with his wife Shelly, the love of his life. Steve was a devoted attendee of both the Valley Christian Assembly of Charleston and the Ashton Baptist Church of Ashton, WV. He also loved his Bible Study Group, where he gained peace and understanding of the Word of God. Steve is survived by his loving wife Michele (Shelly); son, Jason Becher of Charleston; daughter, Elizabeth Butcher of Columbus, OH; son, Brandon Butcher of Barboursville, WV; and two grandchildren. He is also survived by sisters, Sarah (Vic) Sands of Chelyan, WV, Sue (Pat) Gallagher of Charleston and Cyndi (Chuck) Bowman of St. Albans, WV; in laws, Jimmy and Mary Edmonds of Apple Grove; as well as numerous nieces and nephews. He was preceded in death by his parents, Robert and Dora Mae Becher; brother, Joe Becher; and a granddaughter. Visitation for family and friends will be Wednesday, September 27, at the Wilcoxen Funeral Home, 2226 Jackson Avenue, Point Pleasant from 6-8 p.m. Funeral services will be held at the funeral home Thursday, September 28 at 11 a.m., with Pastor Philip Dunn of the Valley Christian Assembly in Charleston officiating. Burial will follow at Barton Chapel Cemetery in Apple Grove. In lieu of flowers, the family requests donations to Hospice of Huntington, 1101 6th Avenue, Huntington, WV 25701. Condolences may be expressed to the family and memories may be shared by visiting www.wilcoxenfuneralhome.com.

Stephen Darrell Becher, 60, of Apple Grove, WV, formerly of Charleston, went home to be with his Lord and Savior Jesus Christ, Saturday, September 23, 2017, surrounded by his loving and caring family. Steve was born March 20, 1957, in Charleston... View Obituary & Service Information

The family of Stephen Darrell Becher created this Life Tributes page to make it easy to share your memories.

Send flowers to the Becher family.