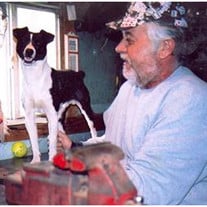 Stephen Scott Rainey, 56, of Gallipolis Ferry, passed away unexpectedly Saturday, October 21, 2017, at Pleasant Valley Hospital. He was born October 3, 1961, in Gallipolis, OH, a son of the late Earnest "Jake" Rainey and Teddy Rose Rainey. Stephen and his son Jamie were owners of The Turd Busters. Stephen was a hard worker and a licensed contractor for the state of West Virginia. He was a graduate of Point Pleasant High School Class of 1980. In addition to his parents, he was preceded in death by one brother, T.G. Rainey; and his father-in-law and mother-in-law, Randall and Cora Baird. He is survived by his loving wife of 32 years, Colleen Rainey of Gallipolis Ferry; a daughter, Kacee Rainey and one son, Jamie Rainey both of Gallipolis Ferry; a brother, Earnest "Bill" Rainey and wife Penny of Point Pleasant; three sisters, Cindy Myers and husband Roy of Southside, Susan Rainey of Gallipolis Ferry and Scarlett Enos and husband Aaron of Point Pleasant. He is also survived by a sister-in-law, Debbie Rainey of Gallipolis Ferry; brother-in-law, Rick Baird and wife Marti of Southside; four nieces, Jessica Rainey, Tiffany Davis, Zoe Enos and Sara Moats; and two nephews Michael Baird and Jacob Rainey. Stephen had a host of family and friends along with his best friends Beagle and Smokey who will miss him dearly. A funeral service will be 1 p.m. Wednesday, October 25, 2017, at Wilcoxen Funeral Home in Point Pleasant, with Pastor Ronnie Long and Pastor Jonathan Pinson officiating and pianist Bill Rainey. Burial will follow at Zion Cemetery in Gallipolis Ferry. Visitation will be from 6-8 p.m. Tuesday at the funeral home. Condolences may be expressed to the family and memories may be shared by visiting www.wilcoxenfuneralhome.com.

The family of Stephen Scott Rainey created this Life Tributes page to make it easy to share your memories.

Send flowers to the Rainey family.