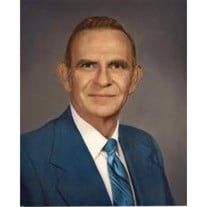 Steve Carpenter, 80, of Point Pleasant, died Saturday, December 1, 2012 at St. Mary's Medical Center in Huntington, WV. He was born May 21, 1932, in Webster Springs, WV, a son of the late Arthur Carpenter and Opal (Perrine) Carpenter. Steve was retired with 36 years of service from American Electric Power. He was a Marine Veteran serving during the Korean War. He was commissioner and past president of the Point Pleasant Housing Authority, past president of the Mason County Chamber of Commerce, past president of the Mason County Development Authority, member of the Beckley Lodge No. 95 A.F. & A.M., member and past president of the Point Pleasant Rotary Club, and member of the Marine Corps League. In addition to his parents, he was preceded in death by three sisters, Marge Stone, Betty Snyder and Peggy Jackson; four brothers, Robert, David, Bill and Joe Carpenter. Steve is survived by his wife, Sue Ann (Thomas) Carpenter of Point Pleasant; two sons and daughters-in-law, Keith and Karen Carpenter of Rock Hill, SC, Charles and Sera Carpenter of Switzerland; one grandson, Benjamin Carpenter of Charleston, SC; one brother, Lemon Carpenter of Diana, WV. A funeral service will be held at 1 p.m., Saturday, December 8, 2012, at Wilcoxen Funeral Home in Point Pleasant with Pastor Marshall Bonecutter officiating. Burial will be at the convenience of the family. Visitation will be Friday from 6-8 p.m. at the funeral home. Online condolences may be made at www.wilcoxenfuneralhome.com.

The family of Steve Carpenter created this Life Tributes page to make it easy to share your memories.

Send flowers to the Carpenter family.