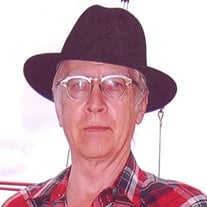 Walden Bennett Roush, 82, of Point Pleasant, passed away peacefully, Saturday, March 12, 2022, in Jacksonville, Florida, after a brief illness. He was born January 28, 1940, in Gallipolis, Ohio, a son of the late Walden F. Roush and Louise Bennett Roush. In addition to his parents, he was preceded in death by his sister, Maudellen Roush Henry. Walden was a graduate of Point Pleasant High School, Class of 1957. He went on to study at Marshall University. While at Marshall he was a member of the debate team, the Chi Beta Phi, a national honorary science fraternity and received a Bachelor of Science Degree with a focus in Physics. Upon graduation from Marshall, Walden joined IBM at their East Fishkill Semiconductor Facility in New York. After being with IBM for a few months, IBM sent him to the University of Illinois where he completed his master's degree, and then returned to IBM East Fishkill Facility. Walden was part of the product development organization at the East Fishkill Facility. He worked there throughout his 30 year career, except for the time he spent at the IBM Memory Device Facility in San Jose, California and IBM Semiconductor Facility in Corbeil, France. Walden's patience to solve problems in the pilot and manufacturing lines was truly outstanding, according to his closest colleagues. He spent most of his time on these lines and received several awards for his ability to diagnose the problems. He was very proud of the multiple patents in his name. After thirty years at IBM, Walden took early retirement from IBM and moved back to his hometown of Point Pleasant, WV. He continued his close association with his dear friend and colleague Tom Vance as they worked together as consultants. In his retirement, Walden was dedicated to the stewardship of his church, St. Peter Lutheran Church in Point Pleasant. He had several hobbies that he enjoyed. He also enjoyed the company of his family, companion Beverly, and friends, who will miss him greatly. He attended many reunions, both with family and high school friends. His time was also spent traveling between California, Florida and West Virginia with his companion, Beverly Fleischer. The warm weather was his friend, as were the wildlife he enjoyed watching while working on crossword puzzles or reading. Walden's days of retirement were filled with the joyful pursuit of a life well lived. Walden is survived by his five nieces and their families, Diane and Barry Redman, Robin and David Jenkins, Lisa and Randy Riddle, Lori and Jim Doeffinger all of Point Pleasant and Kelly and Mike Kauffer of Huntington, WV. He was a special uncle to them and his absence will be greatly felt. There will never be another "Uncle Sonny". Walden is survived by cousins, with whom he remained close throughout his life. Walden is also survived by his loving companion of many years, Beverly Ann (Cottrill) Fleischer of Point Pleasant, her daughter, Kimberly Burford and family of Sissonville, WV, and Beverly's sisters and brother and their families. A funeral service will be held at 1 p.m. Saturday, March 19, 2022, at the St. Peter Lutheran Church in Point Pleasant, with Pastor John Jackson officiating. Burial will follow at Kirkland Memorial Gardens in Point Pleasant. The family will receive friends two hours prior to the funeral service Saturday at the church. Wilcoxen Funeral Home in Point Pleasant is in charge of arrangements. In lieu of flowers, Walden's nieces ask that donations be made to the St. Peter's Lutheran Church in care of, Mr. Bill Knight, 2903 Parrish Avenue, Point Pleasant. WV 25550 Condolences may be expressed to the family and memories may be shared by visiting www.wilcoxenfuneralhome.com.

Walden Bennett Roush, 82, of Point Pleasant, passed away peacefully, Saturday, March 12, 2022, in Jacksonville, Florida, after a brief illness. He was born January 28, 1940, in Gallipolis, Ohio, a son of the late Walden F. Roush and Louise... View Obituary & Service Information

The family of Walden Bennett Roush created this Life Tributes page to make it easy to share your memories.

Send flowers to the Roush family.