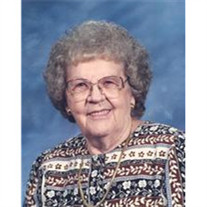 Wavie "Jewell" (Denney) Burns, 93, of Point Pleasant, died Monday, March 25, 2013, at Holzer Medical Center in Gallipolis, Ohio. She was born February 24, 1920, in Southside, WV, a daughter of the late Steward Lesley Denney and Mattie Estella (Mulford) Denney. Jewell was a member of Harmony Baptist Church in Southside, WV, attended New Hope Bible Baptist Church in Point Pleasant and had operated the John Sommer Store for 32 years in Southside. In addition to her parents, she was preceded in death by her husband, General Burns on August 23, 1978; six sisters; and six brothers. She is survived by one sister, Sylvia Lambert of Leon, WV; nieces and nephews, Dixie and Ralph Newman of Point Pleasant, Don and Anna Hudson of Southside, WV, David and Cathy Denney of Jackson, Ohio, Jean Priddy of Leon, WV, Connie Kimberling of Leon, WV, and other nieces and nephews; and best friends, Ozzie and Harriett Finley of Point Pleasant. A funeral service will be held at 1 p.m., Thursday, March 28, 2013, at Wilcoxen Funeral Home in Point Pleasant with Pastor Carl "Boxer" Swisher officiating. Burial will follow at Suncrest Cemetery in Point Pleasant. Visitation will be held two hours prior to the service Thursday. Online condolences may be made at www.wilcoxenfuneralhome.com.

The family of Wavie "Jewell" (Denney) Burns created this Life Tributes page to make it easy to share your memories.

Send flowers to the Burns family.