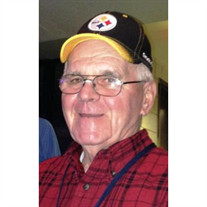 Wesley Eugene "Sonny" Reynolds, 74, of Point Pleasant, passed away Wednesday, May 31, 2017, at Pleasant Valley Hospital. He was born August 4, 1942, in Springfield, OH, a son to the late John Wesley Reynolds and Melva Birchfield Neal. Sonny was a 1961 graduate of Point Pleasant High School. He served his country in the United States Army in the Vietnam War and retired from the D.L.A./D.N.S.C. Depot in Point Pleasant. He was a member of American Legion Post 23, enjoyed riding motorcycles, showing antique cars and frequented Alligator Jacks. He liked to watch Nascar races, fish and was an avid Pittsburgh Steelers Fan. Most of all he enjoyed watching his grandsons grow up. In addition to his parents, he was preceded in death by his aunts and uncles who raised him, Gerald and Evie (Birchfield) Byus and Rev. Gary and Effie (Birchfield) Roach; cousins, Tom Roach and Betty Wallis; sister-in-law, Linda Reynolds; and special friend, Harry "Goog" Bright. He is survived by his wife, Marlene (Rayburn) Reynolds of Point Pleasant; two daughters and sons-in-law, Samantha and Tommy Knapp of Letart and Sonya and Danny Davis of Point Pleasant; four grandsons, Jeremiah (Emily) Hoffman, Jonathan (Bre' Ball) Hoffman of Letart, Wes Davis of Chicago, IL and Zak Davis of Point Pleasant; and one great-granddaughter, Ella Hoffman to arrive in August. He is also survived by two brothers, Jim Reynolds and John (Sue) Reynolds of Gallipolis Ferry; one sister, Charlene Koenig of Pennsylvania; cousin-in-law, Phyllis Roach of Henderson; special friend, Jim Elliott of Point Pleasant; and a host of nieces, nephews and friends. A funeral service will be 1 p.m. Saturday, June 3, 2017, at Wilcoxen Funeral Home in Point Pleasant, with Pastor John Bumgarner officiating. Burial will follow at Concord Cemetery in Henderson. Military graveside rites will be given by the West Virginia Army Honor Guard and American Legion Post 23 of Point Pleasant. Visitation will be from 6-8 p.m. Friday at the funeral home. Serving as pallbearers will be Tommy Knapp, Danny Davis, Jeremiah Hoffman, Jonathan Hoffman, Wes Davis and Zak Davis. Condolences may be expressed to the family and memories may be shared by visiting www.wilcoxenfuneralhome.com.

The family of Wesley E. "Sonny" Reynolds created this Life Tributes page to make it easy to share your memories.

Send flowers to the Reynolds family.